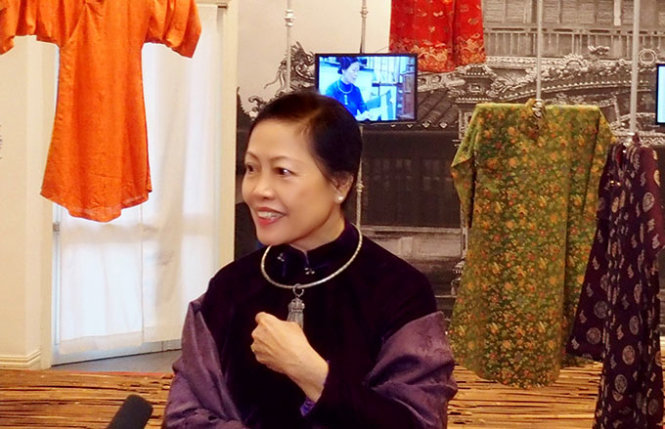 Prof. Thai Kim Lan, a revered researcher on German culture, has had her “ao dai” gowns displayed at an installation art exhibit in Hanoi since January 16.

The event, to close on Friday, is taking place at the Goethe Institut Hanoi, at 56-58 Nguyen Thai Hoc Street, Ba Dinh District, to accentuate the charms and historical values of the costumes which are part of an assortment of “ao dai” by Prof. Lan.

This assemblage has been preserved in Germany for 35 years, she said.

Born in Hue, Lan earned her PhD in philosophy at Ludwig-Maximilians-Universität, a university located in the heart of Munich, in 1976 and taught there until 2007 as a lecturer in comparative philosophy.

She told Tuoi Tre (Youth) newspaper that part of the “ao dai” donned by royal members during the Nguyen Dynasty (1802-1945) – Vietnam’s last monarchy – are her family heirlooms.

“Before I went to Germany for my studies in 1965, ‘ao dai’ was southern Vietnamese women’s most common costume. Even peddlers wore them while moving from place to place. However, when I first returned to Vietnam in 1977, I realized to my disappointment that the local streets were empty of the traditional gowns then,” Prof. Lan said.

Concerned her family’s treasured “ao dai” might get forsaken and damaged over the course of time, Lan insisted her mother send them over to Germany, where they have been preserved since.

Her collection also features those she collected herself during the 1980s.

“I was surprised at the profuse interest in the displayed ‘ao dai’ expressed by young people in Hanoi. The exhibition is only one part of a larger project. My partners and I are planning to hold talks on the costume in Hanoi, Hue City, and Ho Chi Minh City,” she added.

Lan also suggested her contemporaries write about the development of the gown throughout different periods.

“Vietnamese ‘ao dai’ are as unique as the country’s cuisine and need insiders’ experiences. I’m currently in quest of such experiences,” she noted.

The designer behind ‘ao dai’ museum

His long-nurtured dream was realized as his museum, which is dedicated to showcasing only “ao dai” through various periods as well as their making process, opened in District 9, Ho Chi Minh City, in January last year.

Stories about these “ao dai” and their owners are also provided.

Hoang’s museum also hosts exhibitions of works in music, literature, cinema and art, which are inspired by the traditional costume.

“My passion for ‘ao dai’ budded by chance in 1989. Since then, I have made efforts to showcase the attire in over 20 countries. I’ve also visited several museums around the world, among which the kimono museum in Japan impressed me the most. The visit to such museums cemented my resolve to build my “ao dai” museum,” designer Sy Hoang said.

Hoang added he had dreamt of building an “ao dai” museum since his college days.

During that time, he would frequent several local museums to do extensive research on the traditional gown.

The gorgoeous "ao dai" on display at Vietnamese designer Sy Hoang's museum, which is dedicated  to showcasing only the costumes. Photo: Vietnamplus

“The ‘ao dai’ has both esthetic and ethical values, as the wearer automatically adjusts her words and behaviors, while the opposite person can’t bear resentment or ill will against the wearer,” Hoang noted.

Hoang is known as one of the country’s salient “ao dai” designers.

The designer is also a successful businessman and art lecturer.