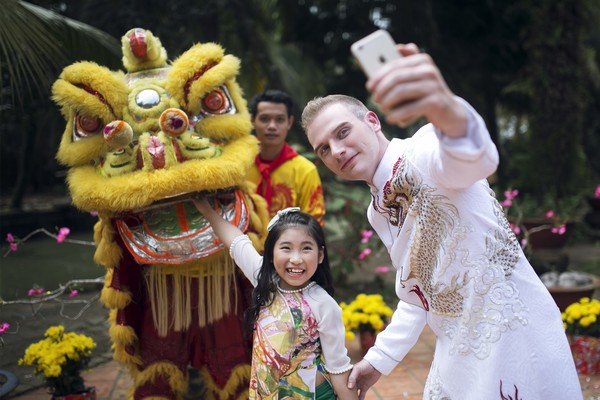 A half-Korean girl and an American expat, who together won the first Vietnamese season of the “Your Face Sounds Familiar Kids” reality show, have debuted their CD and richly-colored music video to celebrate the upcoming Tet (Lunar New Year).

Ju Uyen Nhi, also known as Ju So Yeun, and Kyo York, who served as her mentor in the Portuguese-origin reality TV show “Your Face Sounds Familiar Kids” last year, have jointly released a CD and music video titled “Xuan Yeu Thuong” (Spring of Love) right ahead of Tet.

Tet begins on February 19, with festivities lingering on around one week after that.

The pair showcase their sweet voices and acting skills in emotional songs and boisterous dance steps in cheery songs.

The video clip, which is almost 10 minutes in length, is a combination between traditional and contemporary music by seamlessly blending “dan bau” (traditional Vietnamese monochord), “tuong” (traditional opera), and folk tunes with hip hop and popping.

York said he had spent part of his savings on the special CD and music video.

Ju will fly to South Korea, her father’s home country, and share the video with her relatives and friends to offer them a taste of the gorgeous Tet in Vietnam, the nine-year-old girl said.

Born to a Korean father and a Vietnamese mother, Ju scored high in the local version of the “Your Face Sounds Familiar Kids” show for her sweet voice, boisterous performance, and bewitching impersonation as Vietnamese male artists and Paul Anka, a Canadian singer, songwriter and actor.

The little girl began learning to sing and perform when she was three and a half years old.

York, who has lived in Vietnam for over four years and considers the country his second homeland, has become a household name to many Vietnamese TV viewers thanks to his regular appearances as a contender, host, and coach in several game shows.

He is also working as an English teacher.

He has released several videos which feature him singing against the gorgeous background of landscapes in different regions of the country, including the Mekong Delta.

He also released a CD ahead of Tet last year.

The program required contestants to impersonate iconic entertainment celebrities, including members of the opposite sex, regarding their voice, appearance and air.

Though young boys were not allowed to dress up as female stars, young girls were permitted to masquerade as male celebs.

The show thus met with harsh criticism for its potential adverse impacts on the growing awareness of their own gender orientation among the kid contestants and young viewers.