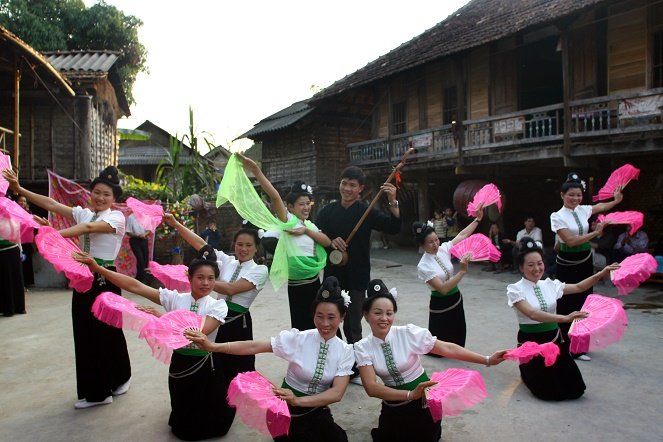 Apart from holding their own fests, most ethnic minority groups in Vietnam celebrate Tet (Lunar New Year) in their own way.

Vietnam is home to 54 ethnic minority groups. Among them, the Kinh people constitute a majority of the population.

Though many of the ethnic groups hold their own traditional fests around the year, they find Tet a special occasion to bond with their families and community and enjoy themselves.

In recent years, homestay services have been offered so that tourists, particularly foreigners, can enjoy a taste of their unique culture and Tet celebrations.

Tet begins on February 19 this year, with festivities lingering for around one week after that.

The H’Mong ethnic group, also known as the Mong, mostly lives in north-east and -west provinces such as Ha Giang, Lao Cai, Lai Chau and Son La, though they are also found in mountainous provinces in the central region of the country.

The ethnic community occupies around 13 percent of Son La Province’s population, or 130,000 people.

As Tet is nearing, the villages reverberate with the sounds of pounding flour to make “banh day” (round rice cake), an indispensable delicacy in Tet meals.

Trang A Cao, a local official, told newswire Vietnamplus that just like the Kinh’s “banh chung” (square glutinous cake), the round “banh day,” symbolic of the sun and moon, are reverently offered to their gods and ancestors during the holiday.

H'Mong ethnic men are pictured erecting a "neu" tree, one of their and most Vietnamese people's long-standing traditions to ward off evils and bring good luck for Tet. Photo: The Thao va Van Hoa

On Lunar New Year's Day, men traditionally take over all the household chores as a token of their breadwinning role during the year.

They welcome any guest on the first day in the belief that guests will bring them good luck for the entire year.

The H’Mong typically stick pieces of paper onto their everyday working tools and stack them neatly next to their altars during Tet, which is suggestive of their gratitude to the tools for helping them with their field work in the past year.

A H'mong ethnic man is seen tapping on the waist of a woman whom he is flirting with as a traditional way to express his love at a spring festival. Photo: Vietnam National Administration of Tourism

Kids play folk games on communal grounds, while young men showcase their flair playing “khen” (a kind of pan-pipe), which is made from six bamboo chunks, to grab the attention of potential mates.

They also dance while playing the instrument, while others usually dance merrily to the music.

The majority of Ba Na people in Kon Tum Province are devout Catholics, according to a provincial newswire.

Though their celebration of Tet is not as sophisticated as the Kinh’s, they still retain several long-standing rituals and a cozy atmosphere.

Women of the San Diu ethnic group in the northern province of Vinh Phuc perform their traditional dance at a spring festival in 2014. Photo: Tuoi Tre

They also buy and prepare food and confectionery to give to one another instead of offering them to their ancestors.

Most of the delicacies are typically grilled in a wooden pipe before being served on “kbang” leaves and cozily shared between family members or friends.

Though sophisticated delicacies are usually spared for their own traditional Tet, the “can” wine drinking ritual is something they cannot do without during the Lunar New Year festival.

Hosts and their guests usually gather around a big jar of “can” wine and sip the fragrant wine through bamboo straws.

Villagers generally gather in “nha rong” (a large stilt-house used for communal purposes), sipping “can” wine and watching and joining dances to the music of their signature gongs on Lunar New Year’s Eve.

They go to church the morning of Lunar New Year’s Day, praying for a year full of prosperity and blessings.

Young members of the Kh'mer ethnic group in the Mekong Delta province of Tra Vinh are pictured performing one of their signature folk dances at a spring festival. Photo: Tuoi Tre

They make up a relatively large population compared to other ethnic minorities.

Unlike many other ethnic groups, the Tay in Hoa Binh Province consider Tet their most significant holiday.

They habitually hold celebrations from the 28th day of the lunar year’s final month, and begin working perfunctorily in their paddy fields on the seventh day of the new year in the hope of an auspicious start.

They prepare cylindrical “banh chung” and “banh gio,” which are made from leaves and flowers of a forest plant.

Shamans are usually summoned to people’s homes to perform rituals before the festivities begin.

All homes are shut around 11:00 pm on Lunar New Year’s Eve, and no one is allowed to enter until the morning of the first day.

Like many Kinh people, the Tay are hesitant about who “xong dat” (takes the first step inside) their houses on that morning.

Early in the morning of the first day of the lunar year, family members traditionally go to a spring to bathe and pick up 12 small pebbles which symbolize the 12 traditional zodiac signs.

They take the pebbles home and toss them to pray for health and bumper crops.

Their festivities resume on the 15th day of the lunar year’s first month and linger until the month’s end.

The Nung ethnic minority group is found mostly in such northeastern provinces as Lang Son, Yen Bai, Cao Bang and Bac Kan. A portion has also settled in some Central Highlands provinces.

The Nung in Yen Bai Province practice Tet traditions in a similar way to the Kinh, a provincial newswire reported.

Their Tet usually begins with a lavish meal of duck meat to ward off bad luck in the old year and usher in good luck in the new year.

They burn incense and open their doors wide on Lunar New Year’s Eve for good luck and blessings to pour in.

Cham ethnic people in the south-central province of Ninh Thuan Province are shown gathering at a festival in this Tuoi Tre file photo.

A foreigner (first right) poses with his Vietnamese friends at a Cham festival in Ninh Thuan Province. Photo: Tuoi Tre

A procession is seen at one of Cham ethnic people's festivals in this Tuoi Tre file photo.