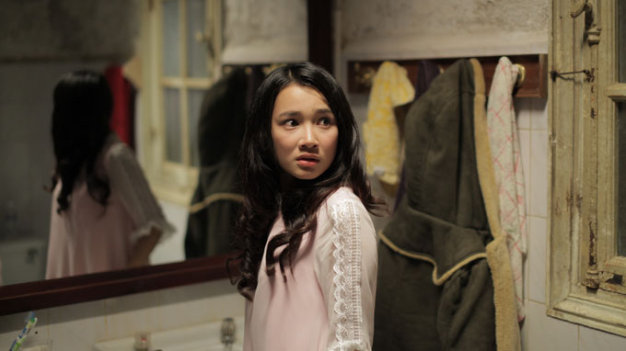 A Viet Kieu (expat Vietnamese) director, whose thrillers have topped the local box office in the past few years, always makes sure his films are depicted with his home country’s language, settings and storylines.

Victor Vu, 40, who has been catapulted to fame in his home country thanks to several local horror blockbusters, rarely confides about his personal life.

A film director and screenwriter, Vu is widely known for covering a wide range of film genres and seamlessly shifting between horror, action, comedy, thriller and romance.

He is one of the most prolific filmmakers in Vietnam today and was a new element to the stagnant Vietnamese film industry back in the early 2000s.

Born in 1975 in North Hollywood, California, he was named Vu Quoc Viet, which his mother said will always remind him of his Vietnamese origin.

His mother would insist he speak Vietnamese at home and he went to Vietnamese classes on weekends.

“I initially had difficulty integrating fully into the American way of life. I kept oscillating between the fun-packed Tet [Vietnamese Lunar New Year] and U.S. greasy fast food and blockbusters, which provided boundless inspiration for my films later,” Vu revealed.

The young man graduated from the School of Cinema and Television at Loyola Marymount University (LMU) in 1998.

First started in 2003, the Vietnamese International Film Festival is a biennial film festival organized by the non-profit Vietnamese-American Arts & Letters Association, the University of California and Vietnamese Language and Culture.

Vu said the two films both address the mental difficulties which expat Vietnamese people encounter in the U.S.

His producer and friend, Silverman, tried talking him into letting his characters speak English, which he said would add appeal to the project.

The posters of four of expat Vietnamese director Victor Vu's local smash hits, which have been produced in the past several years. Photo: Tuoi Tre

Vu, however, was set on keeping all the dialogue in Vietnamese, as he thought a story about expat Vietnamese people must be recounted in their mother tongue.

The pair failed to recoup the investment of almost US$70,000 in the film though it received rave reviews.

Vu noted that the film, however, has provided him with invaluable experience which he did not gain during his time at university.

Vu first visited Vietnam in 2001 to seek a permit for his new film, “Oan Hon” (Spirits), but to his dismay, he failed to obtain permission as his subject matter was considered sensitive back then.

His partner again tried to persuade him to switch the setting to the U.S. and the language to English.

However, Vu was adamant that the film be set in his home country, have an authentic Vietnamese feel and be inspired by the ghost stories his uncles and aunts told him when he was a little boy.

He then took out heavy loans and re-created the moody atmosphere of the Mekong Delta on sets built in Santa Ana, California.

The film, which is in Vietnamese with English subtitles, attracted attention and was sold to a DVD distributor, but again the director failed to recoup his investment.

Set on winning over his home country’s market, the young director officially marked his homecoming with “Chuyen Tinh Xa Xu” (Passport to Love) in 2009.

The film left a strong impression on local audiences for its unique taste.

Even though he has eased himself into the local film market and garnered resounding success, Vu said he always has to stand up for his own opinions.

He revealed that one of his local blockbusters, “Bi Mat Tham Do” (Scandal), was on the verge of being dropped only two weeks before shooting was to begin, as the genre was considered “risky” in the local market.

Vu always writes the scripts for his flicks, which he considers the only way for him to exert his control over the storyline.

In 2013, Vu faced a plagiarism accusation regarding the astonishingly striking resemblances between his film “Giao Lo Dinh Menh” (Inferno) and the Hollywood movie “Shattered.”

The director was so depressed that he refused to receive the seven awards for two films, “Bi Mat Tham Do” (Scandal) – a thriller – and “Thien Menh Anh Hung” (Blood Letter) – a heavily-invested martial arts action fantasy flick – at the 2013 Golden Kite Awards, which are considered Vietnam’s Academy Awards.

Undaunted, he went on to garner more success. His comedy romance, “Co Dau Dai Chien” (Battle of the Brides), is also a local smash hit.

The cover of a DVD of Victor Vu's romance comedy "Co Dau Dai Chien" (Battle of the Brides). Photo: BHD

His 2014 thriller "Qua Tim Mau" (Vengeful Heart), which was adapted from a hit ghost play, is the local film industry’s current record holder, having earned him over VND85 billion ($3.96 million) in revenue.

“Many think I’m interested in making horror films, but in actuality, I’m more keen on spiritual and supernatural elements, which people naturally retreat to in order to maintain a sense of order and safety,” he said.

Though the film revolves around a familial thread, which Vu tried his hand at in his two earliest films, he said he has little difficulty relating to the young protagonists, as he has a younger brother and experienced much of what they went through.

Vu revealed that he owes Tran Hung Dao (1228–1300), a revered marshal and national hero during the Tran Dynasty, a film.

Since his college days, Vu has been held in awe by the marshal’s triumphant military feats, which he is certain would make a brilliant film.