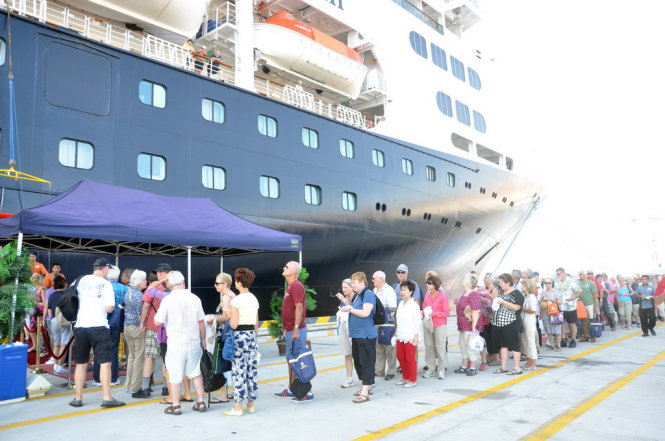 The American cruise ship Seabourn Sojourn, with 400 American and British tourists on board, left Saigon Port in Ho Chi Minh City on Tuesday for Tien Sa Port in the central city of Da Nang.

The tourists had gone on a sightseeing tour around the city’s scenic spots and My Tho in the Mekong Delta province of Tien Giang.

Representatives of Tan Hong Co., which received the tourists, said the company welcomed over 8,000 tourists who arrived on international cruise ships such as the Nautica, Queen Mary 2, Crystal Symphony and Sapphire Princess during the Tet holiday.

The ships berthed at several ports across the country.

Star Pride cruise ship, with over 100 foreign tourists on board, is pictured docking at Quy Nhon Port in the central province of Binh Dinh on February 21, 2015, or the third day of the Lunar New Year. Photo: Tuoi Tre

On the same day the Volendam, a Dutch luxury cruise ship which carried over 1,300 foreigners, also left the southern province of Ba Ria-Vung Tau to continue its itinerary in Nha Trang and Thua Thien-Hue in the central region and the northern province of Quang Ninh.

The ship docked at Tan Cang Cai Mep Port in Ba Ria-Vung Tau Province earlier in the morning, when the tourists took part in a sightseeing and shopping tour in Ho Chi Minh City and Vung Tau.

The Volendam also brought over 1,200 foreigners to Ba Ria-Vung Tau in early January this year, and is expected to visit Vietnam another seven times this year.

According to Ba Ria-Vung Tau border guards, four deluxe ships berthed at the province’s port, bringing in a total of 10,000 international holidaymakers, during the 10 days before, during and after Tet.

Meanwhile, Saigontourist, a major local travel firm, said within the ten days starting February 14, or five days prior to Tet, the company received well-known cruise ships such as the Mariner of the Seas, with over 4,500 tourists aboard; and the Costa Victoria, which carried more than 2,500 tourists and crew members.

According to representatives of several travel companies, a large number of Chinese tourists came to Vietnam on charter flights during the Tet holiday.

Saigontourist said it is slated to welcome seven such flights with over 1,000 Chinese tourists to Nha Trang from late January to March 1.

Foreign tourists on the increase

The Tet holiday also saw a surge in the number of international vacationers in several localities, the Communist Party of Vietnam’s website reported.

According to Thua Thien-Hue Province’s Department of Culture, Sports and Tourism, the province received almost 50,000 tourists over seven days starting on the 27th day of the past lunar year’s last month.

Among them, 32,500 were foreigners, or 65 percent of the province’s total number of tourists at that time.

Relics of the UNESCO-recognized Complex of Monuments greeted roughly 30,000 tourists, one third of whom were foreigners, during the first three days of the Lunar New Year.

The province has offered a wide array of traditional art and music activities, with some festivals such as traditional wrestling and boat racing to run from today to Saturday, or the Lunar New Year’s 10th day.

The beaches and tourism complexes across the province were packed with over 365,000 tourist visits, including more than 22,000 foreign visits.

The province earned roughly VND170 billion (US$7.92 million) in tourism revenue during the holiday.

Tourists enjoy themselves at a beach in Ba Ria-Vung Tau Province during the 2015 Tet (Lunar New Year) Photo: Tuoi Tre

On the same upbeat note, Sapa in the northwestern province of Lao Cai greeted 50,000 local and international tourists during the Tet break, according to the Communist Party of Vietnam’s website.

With all local hotels and resorts fully packed, a large number of tourists were arranged to stay with locals, mostly ethnic minority people, in villages, Tuoi Tre said.

Da Nang in central Vietnam also saw a 10.2 percent rise in the number of tourists during the Tet holiday compared to the same period last year.

International tourists were estimated at 66,170, up by 11.8 percent compared to last year.

The south-central province of Binh Thuan welcomed a total of 75,500 tourist visits over eight days starting on February 15, or the 27th day of the old lunar year’s last month.