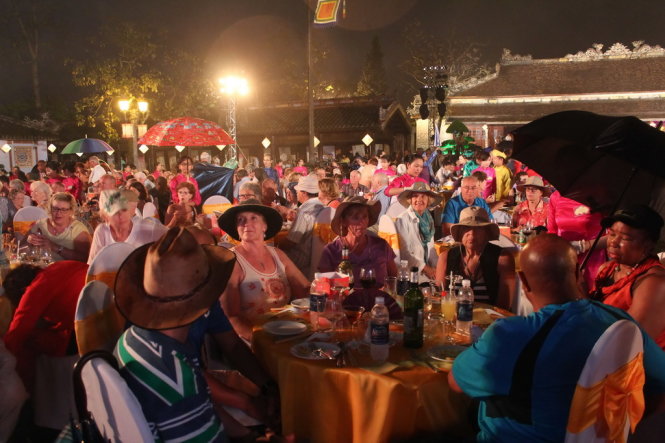 Some 1,000 international sea travelers have been treated to royal culinary delights and lifestyle during a banquet, said to be the largest ever held inside the royal palace in Hue City, on Thursday as part of a tourist promotion program.

The banquet was thrown at the Royal Palace, which is located in the central province of Thua Thien-Hue.

The Royal Palace is part of the UNESCO-recognized Complex of Hue Monuments in Hue City – the provincial capital.

The royal feast is believed to be the largest ever organized inside the Royal Palace.

The banquet was modeled after a program called “Dem Hoang Cung” (Royal Night), which was a highlight at several editions of the city’s signature Hue Festival.

As it rained during the feast, many tourists were wearing raincoats and holding umbrellas while relishing the dishes.

Two foreigners are shown joining a re-enacted royal game during the banquet under the rain. Photo: Tuoi Tre

Tourists are pictured at the entrance to the Hue Royal Palace, where the banquet was held. Photo: Tuoi Tre

The tourists, mostly from European and American countries, arrived on board the cruise ship Celebrity X – Cruises, which docked in the province’s Chan May Port.

The ship carried around 2,100 passengers.

The passengers went sightseeing at the Hue monuments and then visited UNESCO-recognized Hoi An Ancient Town and other scenic spots in the neighboring province of Quang Nam.

According to the organizer of the royal banquet, the event was meant to introduce Hue’s hallmark cuisine and culture to the tourists.

The event is part of the city’s sea travelling promotion program running this year.

Young women are pictured during the re-enactment of a royal dance during the March 12, 2015 banquet. Photo: Tuoi Tre