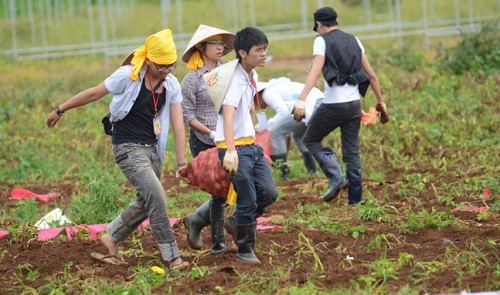 Visiting Da Lat is now not only about doing sightseeing or admiring flowers, as visitors to the resort city have basked in first-hand experiences of rustic life on its many farms in recent years.

Da Lat, dubbed “the city of flowers” which is located in the Central Highlands province of Lam Dong, is home to a large number of flower and vegetable farms.

Many of them have recently allowed tourists, particularly the young, to engage first-hand in many of their production phases and indulge in pastoral delights.

Groups of travelers generally act as farmers for a day or two, and are assigned such strenuous yet fun-packed tasks as weeding, sowing seeds, watering and pruning plants and flowers on different plots, and picking and cooking the vegetables themselves.

On the flower farms, tourists are required to completely concentrate on farming, rather than taking photos, to fully appreciate the work that goes into growing flowers.

They can also pay visits to laboratories on the farms where new breeds of flowers are created.

Tourists are also treated to homestays loaded with memorable experiences and locals’ love.

Owners of many vegetable, flower farms have cooperated with tour operators in Da Lat to offer such compelling farming tours.

Some farming tours to choose from

Tuoi Tre News offers readers information on some such farms which they should visit to make the most of their stay in Da Lat.

Located at 42 Xo Viet Nghe Tinh Street, Lang Biang Farm, which measures roughly 20 hectares, boasts different zones where safe fruits, veggies, and flowers are grown and seedlings are incubated, according to an article recently published by the Vietnam National Administration of Tourism.

Staff members there provide demonstrations of and counseling on flower and veggie growing and caretaking which adopt European technology.

Meanwhile, Organic Farm, in Xuan Tho Commune, is one of those applying European organic growing methods.

Covering an area of around four hectares, Organic Farm has over 100 varieties of vegetables and fruits grown without the use of chemicals and with safe approaches.

Visitors can consume the products right after picking them from the fields.

They can also attend classes on how to prepare delectable salad dishes.

Another miss-not is Thai Phien Flower Village, located in Ward 12, some seven kilometers from the heart of the city.

Endowed with even terrain and fertile soil and fed by springs, the flower village brims all year round with various kinds of flowers, including new, imported varieties.

Artichoke, a signature Da Lat product, abounds in the village.

Similarly, Van Thanh Flower Village, in Ward 5, makes up over 80 percent of the city’s flower volume, with its specialty being domestic and imported varieties of roses.

The garden boasts a large plot which is teeming with around 500 medicinal herb varieties, including such rare, valuable types as Ngoc Linh Ginseng.

In a similar vein, Ham Garden, at 135E Hoang Hoa Tham Street, is popular owing to its “ca phe chon,” a unique kind of coffee which boasts special fragrance and taste after being digested and pooped out by weasels.

Ham Garden is the first farm in Da Lat to feed weasels ripe coffee beans in order to produce the premium coffee, according to the Vietnam National Administration of Tourism.

Apart from being pampered with sizzling cups of the coffee, barbecues, homestay services, and performances of “gong” by ethnic minority artisans, visitors are also shown production lines and have the chance to partake in certain phases.

Before they leave, they will be presented with a memento glass with their photo printed on, and words proving their presence at Ham Garden.

The garden draws influxes of visitors each year, with international tourists accounting for some ten percent, the tourism administration added.