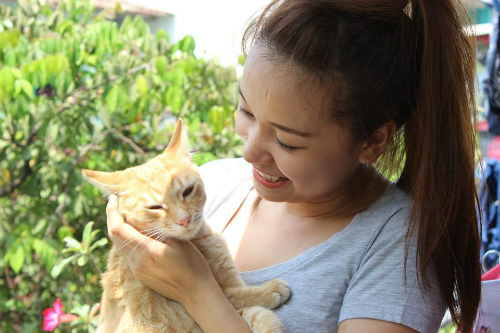 A Ho Chi Minh City girl has had her hands full tending to almost 100 stray, abused cats at home during the past two years.

Kim Anh, in her 20s, has provided medical treatment, care, and love for stray, ill-treated felines in her house in District 4 so far, local newswire VnExpress reported.

She first stumbled upon a motionless, starved kitten at a market near her home over two years ago.

Without hesitation, the girl brought the distressed animal home.

During an outing with her boyfriend one day, Anh heard distress meows in the lower part of a bridge.

The couple pulled over, rummaging through a garbage bin nearby and finding a pair of kittens which were strapped tight in a plastic bag and dumped into the bin.

Anh immediately came to their rescue and continued to care for them at her home.

Once she even found a litter of eight kittens, with their umbilical cords on, which were thrown away at Tan Thuan Bridge linking District 7 and District 4.

The cats have grown up to be healthy, agile mice catchers.

Sensing a calling to help cats in need, Anh began to keep an eye on stray, ill-treated felines on roads, in parks, near markets, and at dumping grounds.

She cares for the healthy cats herself while sending the injured to vets.

The girl is elated at the full recovery of many of her feline siblings and aches over some deaths despite her efforts to save them.

She said she had saved a kitten which fell off from the third floor of a building.

The animal was rushed to a vet who said not much could help.

With her persistence and boundless love, Anh painstakingly looked after the kitten, which later made a miraculous recovery though it sustains permanent injury to the right eye.

Before going to work and getting home every day, Anh is busy feeding, cuddling the cats and clearing their mess.

Her mother, younger sister, and some animal-loving neighbors also help her care for the cats.

Daunting challenges arise when dozens of her cats catch plagues at the same time.

During such bouts, the girl is worn out taking them to vets and sanitizing her home to keep others from being infected.

Anh and her family cover all medical and food costs for the felines.

She sometimes calls for donations from animal lovers to save the cats in critical conditions.

As the flock keeps expanding while her home does not have enough space, Anh has no choice but to find new owners for some of her cats by posting notices on social networks.

She always makes sure that the new owners are willing to take good care of the cats and her beloved fluffy friends will not go through ordeals of abuse or ill treatment again.