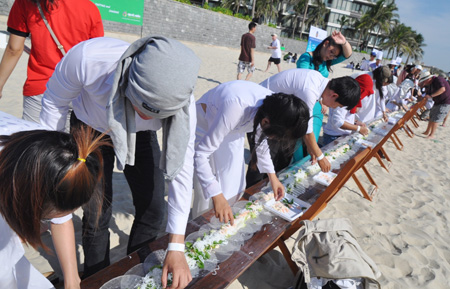 A huge salad roll prepared by local students and international tourists in the central Vietnamese city of Da Nang last year has been named the world’s longest of its kind.

The salad roll is a Vietnamese dish which typically consists of pork, prawn, vegetables, “bun” (rice vermicelli), and other ingredients wrapped in “banh trang” (rice paper).

They are served right after being prepared and are not deep fried or cooked on the outside.

The rolls are considered a common street snack or appetizer in Vietnamese restaurants.

The Guinness-recognized roll weighed 500 kilograms and measured 500 meters in length.

The roll was prepared at the Hyatt Regency Da Nang Resort on June 5, 2014 by 500 people, including some 200 foreign tourists who are specialists and managers in the tourism and aviation sectors and 300 students from a local school and university.

The event was part of the activities of the two-day APOT Asia International Forum 2014, which was held in the central city in June last year, according to danangtourism.gov.vn.

The forum provided professionals with an opportunity to exchange their ideas and experiences regarding tourism.

According to representatives of the Da Nang Tourism Promotion Center, the organizers of the APOT Asia International Forum will announce the recognition of the world’s longest “goi cuon” on the forum’s official website and keep international media agencies informed of it. The center has also proposed that APOT Asia launch a program to promote Vietnamese “goi cuon” on its Asia-Pacific flights.

APOT Asia, whose members include in-flight service management, service providers, airlines catering management, sales management and tourism services, media partners and hotel management in the region, aims to improve the quality of flight services through exchanges and regular dialogues, and to support and promote products and destinations to business professionals and enterprises the world over.