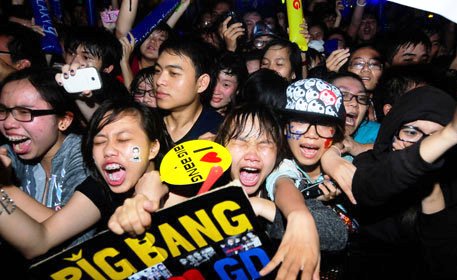 Many young locals have expressed excessive adoration for their showbiz idols in recent years, with the latest incident being the overenthusiastic embrace of seven K-pop bands arriving in Vietnam for a concert on the weekend.

The seven popular K-pop boybands and girlbands – SHINee, Sistar, Teen Top, Block B, A Pink, EXO, and GOT7 – immensely enthralled their fans in the “Music Bank Hanoi” show, which took place at My Dinh Stadium at 6:00 pm on Saturday.

The three-hour event saw the bands “explode” the stage with their hits and impress diehard fans with their performances of Vietnamese songs.

Music Bank is a popular Korean music television program which debuted in 1998 on KBS and has aired weekly since.

The Hanoi concert is expected to air on KBS, a major South Korean broadcaster, on April 8.

There would be nothing out of the ordinary about such a concert but for the Vietnamese fans’ overly feverish embrace.

Almost 1,000 fans waited eagerly for hours for their idols to show up at Noi Bai International Airport in the capital on Friday.

A number of female fans then burst into tears at the sight of their idols in the flesh.

The throng besieged the Korean singers and even obstructed the movement of their cars.

Some even kissed the chairs on which their idols had sat.

During the Saturday concert, many young fans cheered wildly and screamed at the top of their lungs.

Some fainted or were on the verge of passing out under the influence of overcrowding, shoving and jostling, and screaming feverishly.

Many girls could not stand parting with their idols by the end of the show and began sobbing.

A young female fan who lost her consciousness because of overcrowding and jostling at a K-pop concert in Hanoi on March 28, 2015 is seen carried by a security guard. Photo: Tuoi Tre

The seven popular K-pop bands who performed at "Music Bank Hanoi” held at My Dinh Stadium on March 28, 2015

The youngsters’ overenthusiastic embrace has become a bone of contention among netizens and readers of Tuoi Tre (Youth) newspaper.

Many frowned on such behaviors, stressing that the overenthusiasm may cost them their self-esteem and stain the image of Vietnamese youngsters.

But others are of the opinion that such adoration for idols should be tolerated and respected, as people have their own right to seek an outlet for their excitement.

Expert opinions on the issue are also divided.

“Anyone has their own idols. For example, many hold Singapore’s founding father Lee Kuan Yew in great reverence for his massive contributions and visionary leadership. I myself look up to former Cuban leader Fidel Castro and Russian President Vladimir Putin,” said Associate Professor Van Nhu Cuong, the founder of Luong The Vinh High School in Hanoi.

He added that people’s choice of idols will change considerably over time and depend on their ages as well as frames of mind.

Psychologist Dao Le Hoa An divulged that he venerated a male psychology teacher during his high school years.

The teacher has been a major source of inspiration that has bolstered his resolve in pursuing his dream to the very end, An said.

“Middle school students tend to idolize showbiz celebs for their gorgeous looks and good singing and dancing skills. Their choice of idols will switch from these figures to gifted, aspiring people in their areas of interest later on in their life,” An elaborated.

He thus considered such feverish acts among a number of young fans the norm, which will fade gradually as they mature.

Meanwhile, psychologist Minh Hue underlined that youngsters should be wise enough to determine whether their adoration for such idols stems from their genuine reverence for their talents and the yearning to emulate them in the future or it is just a fad created by peer pressure.

An advised that young fans should learn positive things from their idols to enrich their expertise and skills and get inspired by the idols to strive to realize their own dreams.