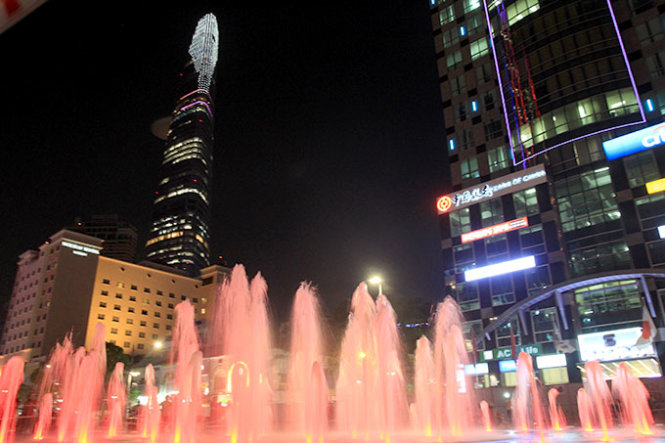 The Nguyen Hue Pedestrian Street in downtown Ho Chi Minh City, which is poised to be open to the public by the end of this month, dazed locals and tourists with its trial music-manipulated water spectacles offered on Monday.

Work on the pedestrian street, located in District 1, has been almost complete, with finishing touches being given.

It opened from Wednesday last week to Monday this week on a pilot basis.

Its music-fluctuated fountain and decorative lighting systems were operated on a trial basis last night.

The spectacles were enjoyed by attentive, delighted spectators, who had to stand outside the railings to watch the “shows.”

Though the street will not be officially opened until April 30, a number of city dwellers have come there for leisurely strolls in the evening.

Once officially opened, the street will be a venue for parades, meetings, street festivals, and the city’s hallmark Nguyen Hue Flower Street, which has run during Tet (Lunar New Year) for several years with the exception of this year, when it was relocated to Ham Nghi Street nearby.

The walking street will also boast art, exhibition and sports activities, and will be lined with mobile stands that offer for sale a wide array of mementoes and food specialties.

The project investor said earlier this month that it would take some phases for the street to turn wholly pedestrian-only.

The investor has proposed that Nguyen Hue Street be turned pedestrian-only from 6:00 pm to 11:00 pm every Saturday and Sunday night for the time being.

Some photos of the Monday water music spectacles and the pedestrian street in its final construcion phase are as follows:

A water music spectacle with the Bitexco Financial Tower, the city's tallest skycraper, in the background. Photo: Tuoi Tre