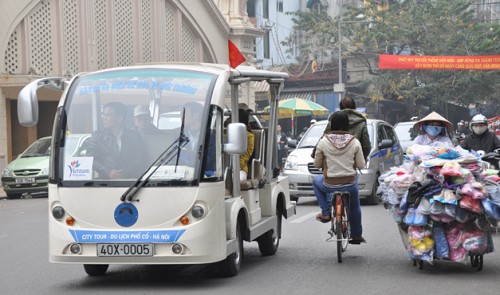 An electric car service is expected to be launched in Ha Long City, home to the UNESCO-recognized Ha Long Bay, next month to diversify its tourism products.

The Vietnam National Administration of Tourism (VNAT) cited representatives of the Ha Long City Tourism Center as saying that the service is expected to be inaugurated next month.

Ha Long City is the heart of the northern province of Quang Ninh.

The cars will carry visitors to some of the city’s major tourist attractions on two routes.

The second route, Hon Gai, will depart from Vincom Ha Long and take tourists to Ha Long Market 1, Bai Tho Mountain, and the Quang Ninh Museum.

In related news, the VNAT also cited MTVT, a local travel firm, as announcing that they have just put five electric cars into operation.

The cars, worth a total of over VND750 million (US$34,952), are deployed for the Minh Chau-Quan Lan island route, the first of its kind in these island communes, which are both located in the province’s Van Don District.

These environmentally-friendly, Japanese-made cars are capable of transporting from nine to 12 passengers each, with their technical and environmental conditions having been fully inspected by competent agencies.

With the cars reaching an estimated speed of 35 kilometers per hour, the entire ride from Minh Chau Port to Quan Lan Port or the other way round takes about 45 minutes.

MTVT plans to put another batch of 40 such cars into use in the time to come, its representatives added.

The model of electric cars has been adopted in four other places in Vietnam, namely Hanoi, Sam Son Town in north-central Thanh Hoa Province, Dong Hoi in central Quang Binh Province, and Cua Lo Town in central Nghe An Province.

According to the Ministry of Transport’s statistics released in November last year, the four localities in the northern and central regions currently boast a total of 621 electric cars, including 50 in the capital city.

Newswire Vietnamplus quoted Deputy Minister of Transport Le Dinh Tho as saying at a November 2014 meeting that the use of electric cars has boosted tourism and helped curb the number of motorbikes and cyclos – bicycle taxis that are a sort of pedicab with one or two passengers in a seat in the front and the driver pedaling in the rear – in use at scenic spots and tourist destinations.