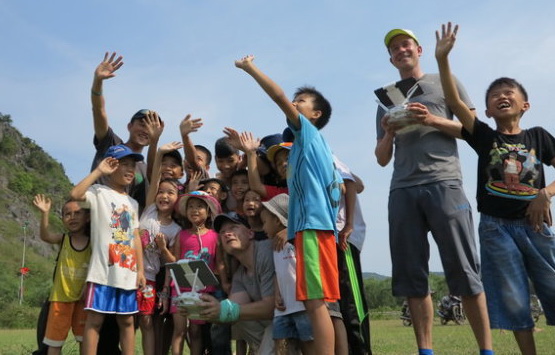 A crew from the American Broadcasting Company (ABC) is currently in Vietnam to prepare for its first-ever live program that accentuates the country’s natural places of interest.

Last month the American broadcaster signed an agreement with authorities in Vietnam to feature the Southeast Asian country’s beauty spots in “Good Morning America,” a well-loved program watched by an average of six million subscribers every day.

It will be the first time that ABC has reported live from inside one of the grottos located in the central Vietnamese province of Quang Binh.

The two-hour show will also incorporate gorgeous videos of the UNESCO-recognized Ha Long Bay in the northern province of Quang Ninh; the Son River, which snakes its way through Quang Binh; and other idyllic rural charms of the country.

The show is scheduled to air at 6:00 am on Wednesday next week in American time, or 6:00 pm the same day in Vietnamese time.

Viewers in Vietnam will not be able to watch the show live, but can still enjoy its re-broadcast on ABC’s website, at abc.go.com.

Two Tuoi Tre (Youth) newspaper reporters recently joined the ABC crew in the process of producing their unprecedentedly special program, on condition that they keep the exact location an absolute secret until the airing date to maximize the show’s suspense and appeal.

A 32-second trailer of the show, which was launched online early this week, has drawn ample attention.

On Thursday, Maria Stefanopoulos, production manager at ABC News, Good Morning America, eagerly told the Tuoi Tre reporters that after watching the trailer, many viewers thought that the show would feature resplendent landscapes from Hawaii, not Vietnam.

Maria Stefanopoulos (first left), production manager at ABC News, Good Morning America, and creator of the May 13, 2015 show on a Vietnamese cave, discusses the program with her crewmembers. Photo: Tuoi Tre

Meanwhile, Romeo Durscher, director of education at DJI, a well-known drone camera producer, said only two hours after the launch of the trailer, representatives of many American tourism magazines contacted him for exclusive rights to write diaries on and take photos of the ABC show.

Durscher, who is in charge of the crew’s drone camera operation, added he and his partners will use a total of seven Phantom 3 drone cameras, DJI's latest line, for aerial shots in the show.

The line debuted on the market only a few weeks earlier, he noted.

Durscher said last month he and ABC technicians conducted a reconnaissance trip to the grotto, the show’s venue, and performed trial camera work, which turned out well, though filming inside caves is a far cry from that in the open air.

On Thursday, the first packages were carried by porters of a local travel film by road, while bulkier items will arrive by helicopter later.

A helicopter is seen transporting the ABC crew's equipment to the grotto. Photo: Tuoi Tre

At 7:30 am that day, Stefanopoulos, two cameramen, two lighting experts, and other Vietnamese and U.S. pundits flew into the grotto along with over one metric ton of equipment to set up a signal transmission station and install lighting systems.

ABC photography specialists went to great lengths to make sure two teeny cameras were firmly fixed to the area beneath the helicopter’s front shaft.

She will also appear on the Vietnam show.

"It's a great honor for me to be selected as the host of ABC's first-ever live program shot from inside a grotto in Vietnam," Ginger Zee, the host of “Good Morning America” and “ABC World News Tonight,” said. She is pictured in a shot along the Son River, which meanders in Quang Binh Province. Photo: Tuoi Tre

Once again, Stefanopoulos warned crew members and visitors not to upload snapshots taken during this trip onto social networks or pinpoint the filming location.

On Saturday morning, the team’s last members reached the grotto.

Once inside the cave, contact with the outside world was blocked. Only key members were allowed access to satellite communications means.

Only on Friday evening did ABC grant the Tuoi Tre reporters the permission to inform the newspaper’s readers that the program is being filmed in Quang Binh, as long as no details on the exact grotto would be given.

Stefanopoulos told the Tuoi Tre reporters that as one of ABC’s strengths is using drone cameras to make live reportage, she and her colleagues were tasked with rummaging for alluring spots to do so.

“From the loads of information I read, I carefully weighed between several imposing caves in the world and finally decided on the Vietnamese grotto,” she divulged.

She held her breath as her project on the Vietnamese cave was faced with fierce competition from those submitted by her colleagues.

“My project finally beat all the others,” Stefanopoulos said.

In mid-March, as soon as the ABC directorate gave a go-ahead for her project, she immediately embarked on her huge workload and contacted her Vietnamese partners.

“ABC rarely features Asian countries in its ‘Good Morning America’ program simply due to time zone differences. Though a program was conducted in Tibet previously, projects highlighting Asian countries tend to lack competitiveness compared to others,” she explained.

Stefanopoulos said one of the crew’s major concerns was how to transport over 150 suitcases from London and New York to Vietnam safely and in time.

“The transport would take a week. While we were getting ready to send our crew and equipment over here, progress was impeded by Vietnamese people’s recent six-day public holiday [which ran from April 28 to May 3]. My heart raced as we would be late for the filming if problems cropped up,” she recalled.

Durscher, director of education at DJI, took great pride in the shots he and his team took during the reconnaissance trip.

“Everyone at the ABC office found the project highly intriguing and good for the money,” he added.

Now in its 40th year, “Good Morning America” has been watched by generations of viewers who wake up to the show's award-winning combination of breaking news, hard-hitting interviews, exclusive investigations, and financial reporting, according to the broadcaster’s website.