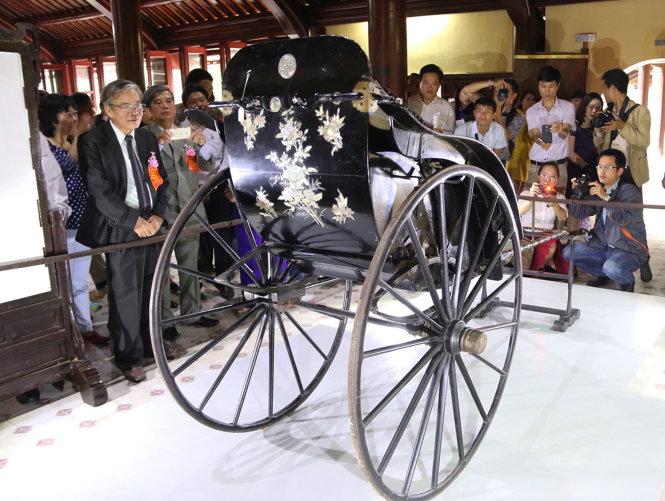 Doubts have surfaced among local experts regarding the authenticity of a royal rickshaw, whose recent homecoming is considered a happy ending for insiders’ unprecedentedly concerted efforts.

The rickshaw, which is believed to be gifted by King Thanh Thai (1879-1954), the 10th king of the Nguyen Dynasty- the country last dynasty- to his mother during their lifetime, is considered a royal treasure.

The item is highly cherished for its technical, aesthetic, cultural, and historical values.

The rickshaw is currently displayed at Dien Tho Palace, part of the UNESCO-recognized Complex of Monuments in Hue City.

The complex is a prominent highlight in Hue, the capital city of the central province of Thua Thien-Hue.

The richshaw’s homecoming is the fruit of Vietnamese culture authorities’ campaign, with the leader of a Paris-based museum giving up its legal right to purchase the object, and notable fund-raising efforts.

The prized object has drawn a large number of locals, tourists, and experts.

Most experts marveled at the rickshaw’s good condition, sophisticated design and carvings and concurred on its rarity.

However, many of these experts are also dubious regarding whether the item is indeed a royal one or was presented by King Thanh Thai to his mother.

Phan Thuan An, a respected researcher and authority on the Nguyen Dynasty (1802-1945), observed that the rickshaw is decorated with only floral patterns, which is typical of a court official rather than of a king or a king’s mother.

Likewise, revered researcher Nguyen Xuan Hoa, former director of the provincial Department of Culture and Information, noticed that the rickshaw does not feature any royal hallmarks, which makes it unlikely to be a royal treasure.

The item was custom-made from “trac” wood encrusted with conch, which was quite popular among the lower classes back then, instead of boasting a kingly gilded texture.   Tran Dinh Son, another seasoned researcher, stressed even if the handwriting on a note thought to be written by King Thanh Thai when he was about to sold the rickshaw and some other items is proven as the king’s, there is no solid evidence confirming that he had gifted the object to his mother.

Son added the item may belong to King Thanh Thai’s reign, but its story might be fabricated by antique brokers, which is relatively common in antique transactions.

According to Phan Thanh Hai, director of the Hue Monuments Conservation Center, which is tasked with purchasing and preserving the rickshaw, the Vietnamese Embassy in France is on their way to send his center a number of documents validating the rickshaw’s origin.

The documents were provided by the organizer of an auction held in France in June last year, where the rickshaw was purchased from.

Hai added his center will announce the documents upon their receipt, and conduct thorough research into the rickshaw’s questionable aspects.