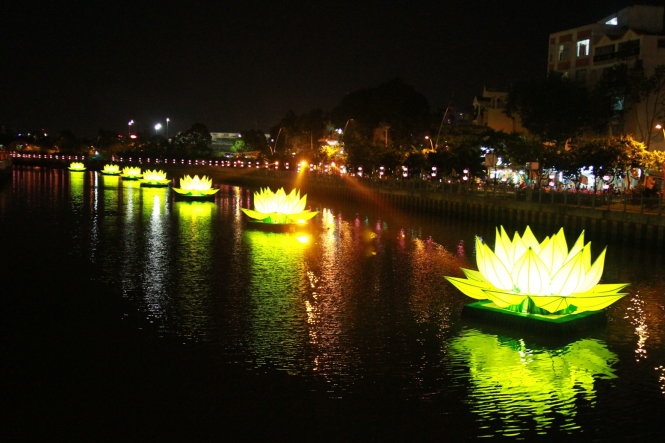 Seven large lotuses “blooming” on a revived canal in Ho Chi Minh City will remain lighted the entire week as part of the ongoing activities held in commemoration of this year’s Vesak, informally known as the Buddha’s Birthday.

Vesak, or "Buddha Day," is a major Buddhist festival celebrating the birth, enlightenment, and death of the Buddha on one full-moon day.

The holiday is traditionally observed by Buddhists in Sri Lanka, Nepal, Tibet, Bangladesh, India, Southeast Asian countries, including Vietnam, and other places all over the world.

This year’s Vesak falls in the year 2559 in the Buddhist calendar and is running from this Monday to next Monday.

The Quan Am (Boddhisatva of Compassion) Monastery, located in Phu Nhuan District in Ho Chi Minh City, held a solemn ceremony on Monday night to light up three large lotuses afloat on the Nhieu Loc Canal.

The flowers will remain lit at night until Monday next week. The canal, which snakes through District 1, District 3, Phu Nhuan District, Binh Thanh District, and Tan Binh District, has undergone a mammoth revamp, launched in 1993 and expected to finish in 2020, to “resurrect” it from alarming pollution.

Apart from the religious celebrative significance, setting the seven lotuses alight on the canal is also meant to raise residents’ awareness of making sure the revived channel will stay clean and green for many years to come.

This is the third year that the Quan Am Monastery has set seven huge lotuses afloat on the canal on the same occasion.

The monastery’s clergy has also set fish free into the canal several times.

In related news, the Buddhism Cultural Exhibition Week is going on in Ho Chi Minh City from Sunday to Tuesday next week to commemorate the Buddha Day.

The exhibition, which is running at Vietnam Quoc Tu (Vietnam’s National Pagoda), located at 16B 3-2 Street in District 10, features nearly 400 artifacts, photos, and paintings that highlight Buddhism’s major events during the course of the past 50 years.

Also on display are photos capturing the accomplishments by the Vietnam Buddhist Sangha’s Ho Chi Minh City division for the past years.

“Xa Loi,” or pearl-like remains of key Buddhist figures, of Boddhisatva Thich Quang Duc, who set himself on fire during a 1963 revolt in protest at the former U.S.-backed Saigon regime, has been displayed at the exhibition for the first time.