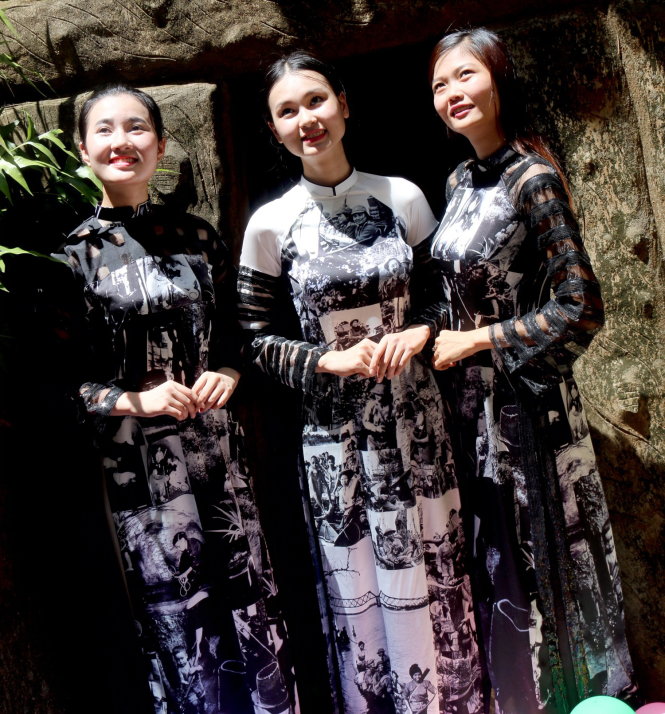 Wartime photos have been showcased for the first time on the “ao dai” featured at an installation art exhibit which is running inside a historic tunnel in central Vietnam.

The black and white photos are printed on the “ao dai” (traditional long gown) of a fashion collection themed “Peace – Underground Legends.”

The photos capture slices of the lives of residents who spent over 2,000 days during wartime inside the Vinh Moc Tunnel, a historical relic located in Vinh Linh District in Quang Tri Province.

In the photos, taken during the war in Vietnam, which ended in 1975, are children carrying guns, guerrillas during underground secret meetings, and soldiers and female guerillas wearing beaming smiles.

The collection’s author, designer Viet Bao, said the photos printed on his “ao dai” come from archives on over 500 local families who intrepidly built, stayed put, and fought inside the tunnel for over 2,000 days.

The designer will display the collection in Thailand in early August and at an “ao dai” event in Hanoi in October.

The “ao dai” display is part of an ongoing installation art exhibition, “Xuong Dat Gap Troi” (Getting Underground to See the Sky), which opened inside the Vinh Moc Tunnel on Tuesday and will close on Saturday next week.

The event is a brainchild cherished for dozens of years by local artist Vo Xuan Huy, a lecturer at the Hue College of Arts, situated in the central province of Thua Thien-Hue.

Two thousand colored balloons, which are symbolic of the over 2,000 days that the residents spent inside the tunnel, were released from the tunnel into the sky.

The richly colored balloons are released from inside the Vinh Moc Tunnel into the sky to the delightful surprise of visitors at the installation art exhibit "Xuong Dat Gap Troi" (Getting Underground to See the Sky). Photo: Tuoi Tre

The balloons, flowers, and lush vegetation at the exhibition seem to shine over the tunnel’s narrowness and stuffiness.

Artist Huy stressed his installations are inspired by the idea that the Vinh Linh residents survived the wartime ordeal and their tremendous loss of lives in quest of the “light at the end of the tunnel” and faith to move on in life.

Huy’s exhibition is also joined by lecturers and students from Hendrix College from the U.S.

According to Nguyen Huu Thang, director of Quang Tri’s Department of Culture, Sports, and Tourism, it is the first time that a historical relic in the province has been chosen as the venue for such a unique art event.

‘It’s an innovative approach to fuse contemporary art into commemorative programs of historical events,” he noted.

According to historical archives, the Vinh Linh residents built the Vinh Moc Tunnel with simple working tools as a cemented structure against the American troops’ relentless bombings.

They surmounted untold difficulty and defied the bombing raids to dig up around 3.7 billion cubic meters of hard rock to construct the underground marvel.

After three years of construction, the tunnel buttress was completed in 1968.

The bunker boasts three fortified layers, with the third layer some 23 meters from the ground.

The tunnel measures around 1.7 kilometers and has 13 entrances and three warden booths.

Approximately 60 children were born while over 5,000 perished during the over 2,000 days of residents building and fighting inside the bunker.