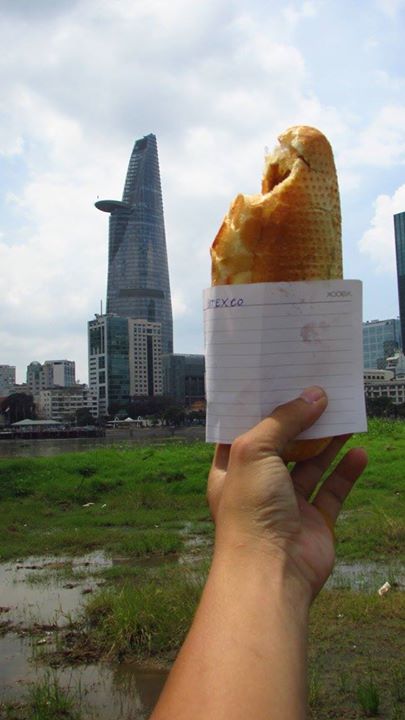 A controversy has recently erupted over a photo for its strange concept which juxtaposes Ho Chi Minh City’s iconic building with a partly eaten loaf of bread.

The controversial photo won third prize in the “Food” category of Canon Photomarathon 2015, an annual photography competition, which took place on October 18 at the Stadium of Military Zone No. 7 in Phu Nhuan District.

Captured by Tran Xuan Tien, a student from Van Lang University, it depicts the southern hub’s Bitexco Financial Tower in District 1 standing next to a partly eaten loaf of bread, on a background of weeds, puddles, and the Saigon River.

The photo triggered controversy over its lack of aesthetics compared to other winning artworks, with many people saying it is not impressive, while the concept is really strange, according to VnExpress.

“It’s not a beautiful photo, but it’s interesting. It combines one symbol of Saigon and another of Vietnam in general. One is architectural and the other is culinary,” the newswire quoted Man Phan, a reader, as saying.

Talking about his artwork, Tien said he is happy with the third prize, and has no comment about the apparent debate as ideas on artistic topics are always subjective and biased.

“My photo has two subjects, including cuisine and Saigon. Although Vietnam’s cuisine is diverse, I’m only impressed by Saigon’s bread, while Bitexco also makes me think of the city, as it is a new, modern icon. The final mission is to find the common points between them,” Tien explained.

The young photographer added that these symbols represent not only a dynamic, fast-paced city but also the existence of the gap between the rich and poor, reflected by the luxuriant Bitexco building compared to the partly eaten bread, and the river that divides between District 1, a magnificent area, and District 2, which is often flooded.

Although the photo, taken by a compact camera, did not satisfy Tien, he was really enthusiastic about the idea, VnExpress reported.

This young man said art can come from the simplest things in life, but sometimes one neglects it and only focuses on how to earn a living.

“The only important thing is that I put all my effort into this photo. It reflects a part of myself, someone who always views life through a humorous, simple, but sometimes crazy angle,” Tien said.

This year’s winner was Le Duc Bao An, whose photo describes the moment the judge announced the winner of a Muay Thai boxing competition held at the Stadium of Military Zone No. 7.

The first-prize photo depicts the moment a judge announces the winner of a Muay Thai boxing competition held at the Stadium of Military Zone No. 7. Photo: Facebook page of the contest.