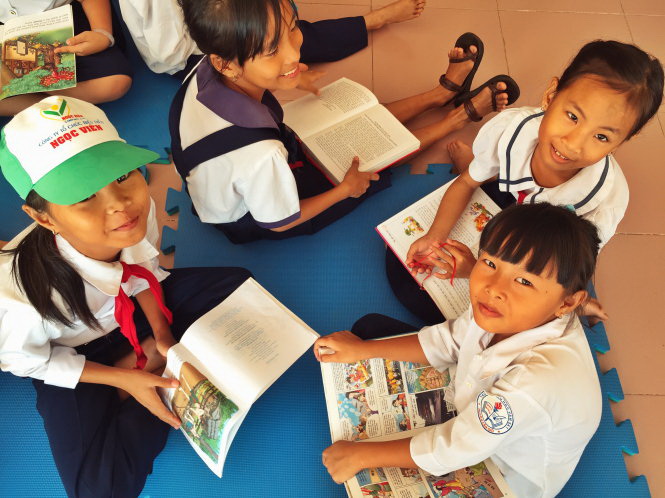 The first part of a program to encourage reading amongst young students, particularly those in remote areas, brought children’s publications to little kids in an outlying district of Ho Chi Minh City over the weekend.

As the bus topped with books drew to a stop and two shelves were unloaded, enthusiastic children swarmed around it.

Each grabbed a colorful pictorial, storybook or other publications that cover a variety of themes, including history and ethics, and are rich in illustrations and educational content.

Nguyen Phuc Hong, a second grader, hardly had time to look for a chair to sit on.

He casually placed the Vietnamese version of a children’s book by Italian author and illustrator Tony Wolf on the floor, voraciously consuming every line of it.

The little boy, who has four younger siblings, said he does not have books at home.

Having his hands full looking after his siblings, he has no time whatsoever for books.

Tuong Van, a fifth grader, was looking her best and had been waiting for the ‘miracle’ bus to arrive since 6:00 am.

“We showed up early this morning. I really love reading,” she revealed, before reading extracts from a book aloud to a first grader.

Huynh Nhu, 8, was intrigued by a pictorial history book, the first she has ever set eyes on. Vam Sat Elementary School has only seven classes with nearly 200 students from first to fifth grades.

At the Saturday reading event, most of these students were treated to good books and wholesome games, including crayon drawings and puzzle solving.

They were also shown how to read effectively and maximize their retention of the books’ content.

Phi Yen, who holds a PhD degree in genetics obtained in Tours, France and a master’s in clinical psychology earned from the École des Psychologues Praticiens de Paris (Paris College of Psychology), has led one of the two volunteering groups joining the Book Bus project.

She also selected the books to be presented to the kids and came up with the idea of how to make books more accessible to kids in the Mekong Delta.

“Through research on behavior and reading habits, we’ve realized a need to provide kids with instructions on how to read beneficially. Residents in different localities access books in different ways,” she said.

The Book Bus project is meant to cultivate good reading habits among minors and help them make the most of publications in an innovative way.

According to Nguyen Xuan Minh, a representative of Tre Publishing House, the Saturday Book Bus ride carried over 700 books of various kinds.

The publisher also gifted almost 300 books in science and history, worth VND5 million (US$224), to Vam Sat’s library.

After the pilot ride on the weekend, the Book Bus project is slated to officially kick off on Vietnam Book Day, April 21, next year and run once every month.

The project will pay special attention to remote, bordering areas throughout the country where residents have low literacy rates and limited access to books.