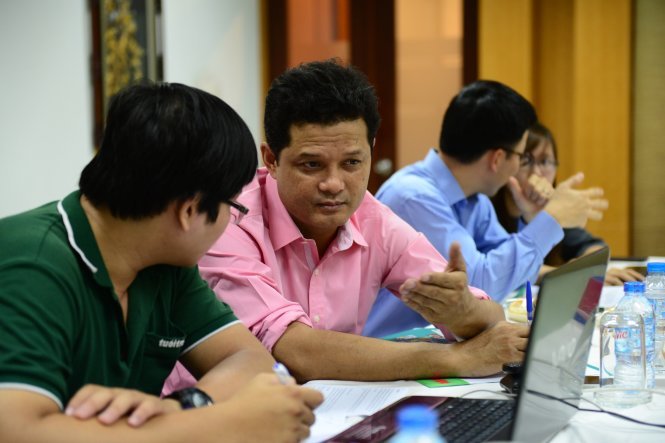 Many experts agreed that Vietnam needs a special team, consisting of top chefs, who will represent the country in overseas campaigns to promote Vietnamese culture, tourism and cuisine.

Such a team should include the participation of leading chefs and culinary schools, and support from the government, Sakal Phoeung, executive chef with Sofitel Saigon Plaza, told the exchange.

The team members will showcase how to prepare and cook the most typical Vietnamese foods in front of international diners at the world’s biggest travel fairs or major events, the French chef, who is also president of Disciples Escoffier Vietnam, explained.

The chef said Vietnamese cuisine has the strength of being a rich and nutritious balance, more suitable for the Western appetite than other regional countries.

However, with Vietnam lagging behind its regional peers in promoting its cuisine to the world, the country is advised to start taking action as soon as possible, he added.

Bui Thi Suong, a seasoned gastronomer, underlined the necessity to prepare a “clear and special strategy” for promoting Vietnamese cuisine.

“Vietnam should select the specific types of food it wants to show to the world,” Suong, who is known within the local industry thanks to her role as a juror in several cooking contests, said during the exchange.

“We should also ensure conditions for producing the best examples of these foods, with chefs and businesses giving their helping hands.”

The online exchange, themed “How to promote Vietnamese food to the world,” was co-organized by Tuoi Tre and the organizers of the “Golden Spoon,” a nationwide cooking competition aimed at seeking and honoring traditional dishes that represent the cultural specificity of each region across Vietnam.

The contest is organized by Binh Duong-based porcelain maker Minh Long 1 Co. Ltd. and the Business Studies & Assistance Center, and is supported by the Vietnam National Administration of Tourism together with the Vietnam Chamber of Commerce and Industry.

Its final round will take place in the southern province of Binh Duong on December 2, and the winners will be announced in Ho Chi Minh City the following day.

The winning dishes of the “Golden Spoon” contest could be added to the in-flight menu of some Vietnamese carriers to promote them beyond the country, Ly Huy Sang, deputy general director of Minh Long 1, said at the exchange.

Sang said his company is in talks with several airlines, with the aim of letting “air passengers feel the richness and originality of Vietnamese food.”