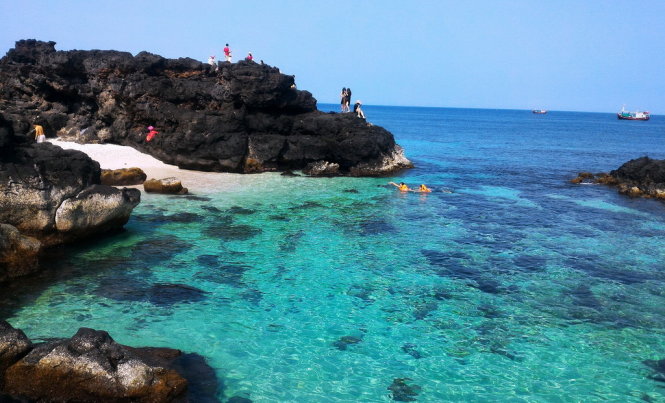 A group of five foreign geology experts from the UNESCO World Heritage Committee recently proposed several measures to develop the potential of two beaches in the central province of Quang Ngai.

The group visited Binh Chau Commune and Ly Son Island from March 31 to April 3 to examine each area’s geological and tourism potential.

The group discovered a number of ancient craters and new geological sediments, driving them to label the ecosystems in the areas as rare.

According to Prof. Setsuya Nakada from the University of Tokyo’s Volcano Research Center, the local community’s engagement with the areas' geological features is an important factor in promoting their heritage.

The group’s findings may also be helpful in getting recognition as UNESCO global geoparks for Binh Chau and Ly Son.

Dr. Nancy Rhoenar Aguda from the University of the Philippines suggested Quang Ngai authorities publish a book on Binh Chau and Ly Son to raise public awareness and provide locals with knowledge that could turn them into informative tour guides who help promote the reputation of the region.

Le Quang Thich, deputy chairman of the Quang Ngai People’s Committee, highly appreciated the advice of the experts, noting that local authorities will accelerate the progress to transform the region into an attractive, well-known tourist destination.

Aside from raising awareness of the value of the local ecosystem, the province will submit documents to support a bid for UNESCO recognition for Binh Chau and Ly Son as global geoparks.