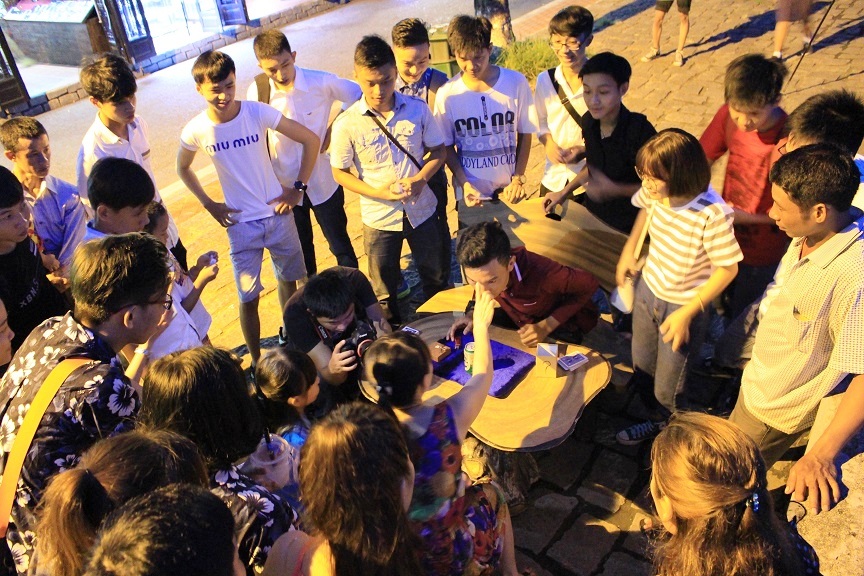 Members of a street magic troupe in the central Vietnamese city of Hue have added new color to local tourism as they enthrall visitors with their performances every evening.

The troupe’s members, naming themselves the Hue Street Magicians Club, gather at their usual spot on Nguyen Dinh Chieu Walking Street, which runs along the famous Huong River, to entertain both domestic and international tourists.

After a few minutes of discussion, the magicians begin placing their props and carrying out strange yet amusing performances which quickly attract a large crowd.

In one of the magic acts, the amateur artist puts a can of water on a piece of purple paper, both of which are placed on a table in front of a volunteer.

The magician then guesses what the participant is thinking as he or she fixates on the water can.

The show runs smoothly as the spectators are amazed by the performer’s correct guesses and ends with a round of applause mixed with laughter from the audience.

“It was amazing! I had no idea how they managed to read my mind,” Hoang Anh, a traveler from the south-central city of Nha Trang, said. “I am a huge magic fan.”

The group also includes several members with fluent English skills, who helped walk foreign visitors through the series of performances by interpreting and explaining the tricks.

The idea of the club originated from the passion for magic of several youngsters in the city, who wished to form a playground for people with similar interests to learn, practice, and have fun.

Established over three years ago, the team currently includes 20 members who are mainly college students.

The street performers chose the Nguyen Dinh Chieu pedestrian street to be their regular stage as the destination still lacks nighttime activities for visitors.

According to Tuong, a member of the team, the magic performances leave a positive impression on tourists.

“The club wishes to bring laughter to the people, and help them enjoy their time in the city,” Bui Huu Thien, leader of the group, said.

“We’ve had to be patient. Thinking of the joy and support of the audience gives us the motivation to overcome the challenge,” the leader added.