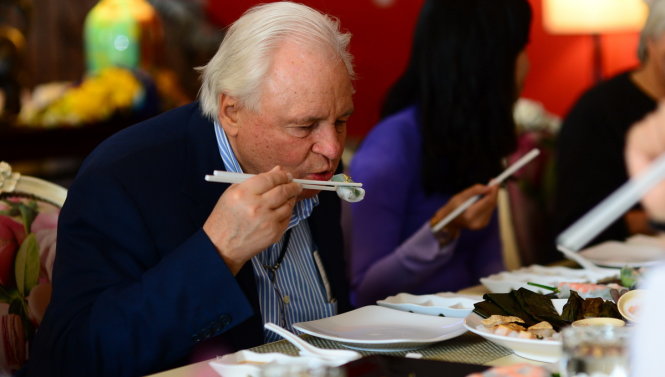 A famed Austrian cook has arrived in Vietnam to sit on the panel of judges for a local cuisine contest. Eckart Witzigmann landed in Ho Chi Minh City on Monday in preparation for the final round of the 2016 Golden Spoon Awards, scheduled for Tuesday. Upon his arrival, Witzigmann visited a Vietnamese restaurant to sample the local cuisine and expressed his delight at the food, especially the spring rolls. On Monday evening, he met the 15 teams shortlisted for the final round of the 2016 Golden Spoon Awards. Witzigmann is an Austrian chef who has worked in prestigious restaurants around the world since his chef-apprenticeship in the Hotel Straubinger in Bad Gastein between 1957 and 1960. On November 19, 1978, he was awarded the esteemed prize of three stars from the French Michelin Guide for his Munich restaurant Aubergine, which he had opened one year earlier. In 1994, he claimed the rare award ‘Chef of the Century’ from the Gault Millau guide. Only three other chefs have been presented with this title: Paul Bocuse, Joël Robuchon and Frédy Girardet. Since then, Witzigmann has published multiple cook books. The Golden Spoon Award has been awarded every year since 2013, according to its website. The contest was designed to be a serious culinary program, “attempting to build bridges of culinary exchange, not only in the domestic market but also at an international level,” the website says. This year, the 15 finalists are required to cook four dishes in 90 minutes, without advance preparation.