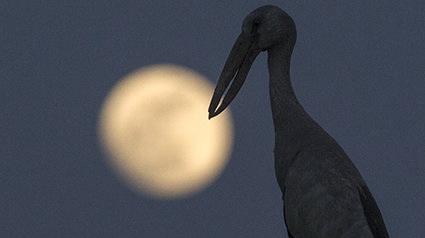 A population of Asian openbills in the Mekong Delta province of Dong Thap has been captured in stunning photos taken by a Ho Chi Minh City-based businessman.

Asian openbills are large wading bird in the Ciconiidae stork family found mainly on the Indian subcontinent and Southeast Asia.

Nguyen Thanh Hung has been taking wildlife photos since 2012 and uses the pastime as an escape from his business ventures.

Hung often travels back and forth between Ho Chi Minh City and his hometown of Dong Thap to wander through paddle fields and honey-myrtle forests on the hunt to photograph the  many birds that inhabit the area.

The businessman found his inspiration photographing Asian openbills in 2016 when the species began nesting in the province’s honey-myrtle forests.

“I was so thrilled.  It was proof that the area’s environment was noticeably improving,” Hung said.

The birds’ mating season began in August, and they start nesting and hatching a month later in September, Hung said. Asian openbill off-spring learn to fly at two months old.

According to Hung, Asian openbills have a habit of taking over the nests of other birds as their own, and can carry water with their mouth over long distances to cool down their nest during hot weather.

Though Hung’s photos have won a number of local photography contests, the man refrained from calling himself a photographer, saying he only hopes to raise awareness for the protection of animals through his photos.

An Asian openbill feeds on a snail in a paddle field.

An Asian openbill (L) fights with another bird for a nest.

An Asian openbill carries a branch to build its nest.

A male Asian openbill builds the nest while his female mate hatches their eggs.

A male Asian openbill builds the nest while his female mate hatches their eggs.

A group of Asian openbills hatch their eggs near each other.

An Asian openbill nest sits on top of a tree.

An Asian openbill carries water in its beak to cool the nest.

An Asian openbill submerges itself in water to ease the pain from a broken leg.

An Asian openbill flies with a broken leg.

Asian openbills and other birds being captured and sold at a market in Long An Province.

Asian openbills and other birds being captured and sold at a market in Long An Province.