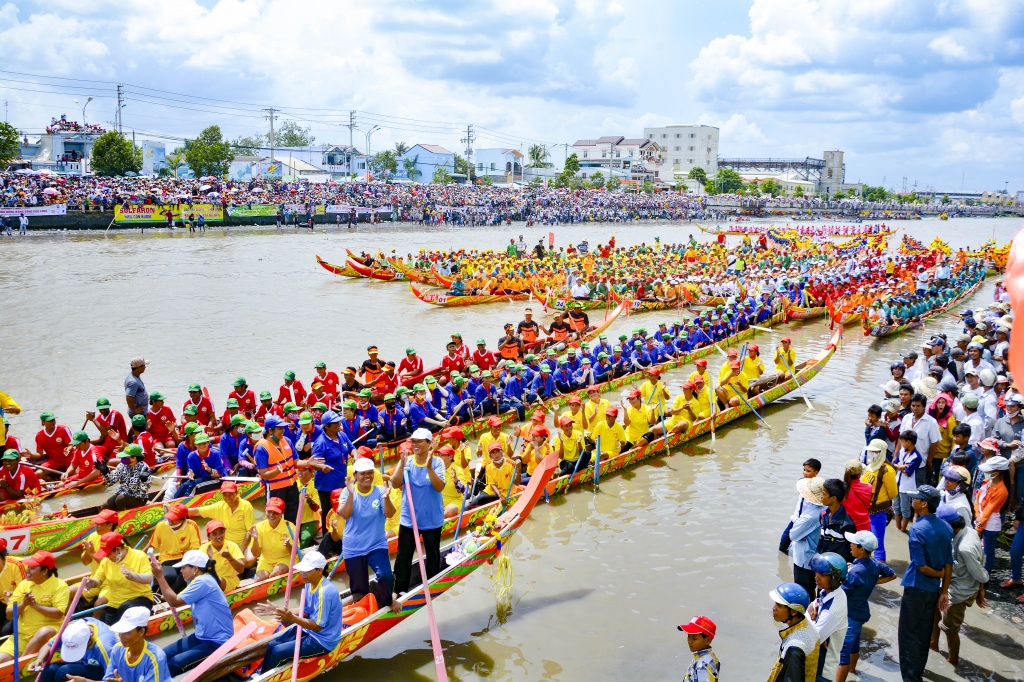 The ‘Ngo canoe’ is a snake-shaped boat crafted from the trunk of the Ta-khian tree and unique to the Khmer people in Vietnam’s Mekong Delta. Each Ngo canoe is the product of craftsmanship, artistic skills, and righteousness.

The Ngo canoe race is held annually as part of the Ok Om Bok festival in the Mekong Delta region that falls on the full moon of the tenth month in the lunar calendar.

During this time of the year, tributaries of the Mekong River are full of water accumulated from the beginning of the rainy season and water levels are beginning to drop.

The race serves as a ritual to bid farewell to the water.

Watching Ngo canoe racing at the Ok Om Bok festival, when the tenth-month moon is at its fullest and the northeast wind is blowing playfully, is also about sending one’s best regards to the departing water.

Below are a series of photos by Dinh Cong Tam featuring the festival.

Snake-shaped Ngo canoes are crafted from a solid tree trunk.

A Ngo canoe filled with paddlers ready to enter the race

Ngo canoes are crafted from the trunk of the Ta-khian tree found in the yards of Khmer pagodas in southern Vietnam.

Each Ngo canoe has its own mascot, which is usually a strong or fast-running animal.

The launching ceremony of a Ngo canoe, also known as the ‘dressing ceremony’ or the ‘bow offering ceremony’, is attended by a monk who chants a song as soothing as the rhythm of paddles.

The eyes of a Ngo canoe are attached by the chief monk or the head of the canoe.