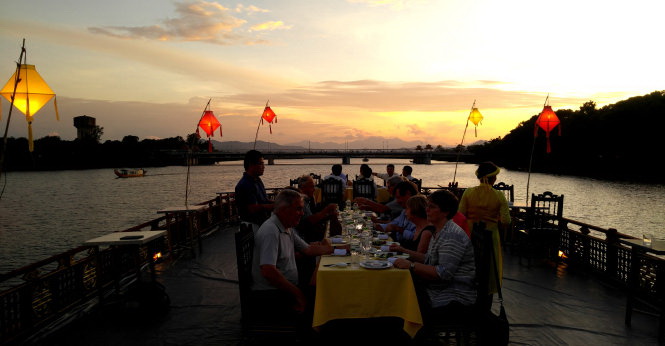 Holidaymakers, particularly foreigners, have been enthralled by the singular offers on royal boat rides along Hue City’s hallmark river.

A Tuoi Tre (Youth) reporter recently took part in an alluring ride on Long Quang Royal Boat, one of the highlights during a tour to Hue City, the country’s former capital located in the central province of Thua Thien- Hue.

The city is home to UNESCO-recognized Complex of Hue Monuments.

The reporter took the one-of-a-kind cruise along the city’s iconic Huong (Perfume) River with a group of vacationers from different countries including the U.K., Australia and China who were sent over by G. Adventures, a large Canadian travel company.

They were also to savor a sumptuous royal feast on board the boat and revel in pieces of the UNESCO-recognized “Nha nhac Cung dinh Hue” (Hue's court music).

Long Quang Royal Boat is modeled after its exquisite prototype used during the Nguyen Dynasty (1802-1945), the country's last monarchy rule.

The boat, which measures 30m in length and 5.4m in height and is capable of carrying 100 passengers, boasts classy royal details such as dragon-shaped carvings and high-quality silk curtains and carpets.

The vessel, operated by Hue Cua Ta Travel Co. since July 2016, has offered tourists leisure rides along the scenic Huong River and opportunities to admire the picturesque landscape and time-honored relics over the past few years.

On the evening of the tour, visitors were picked up at their hotel in the welcoming ceremonial music and were given regal attires to change into.

To their delight, the oldest couple, Patrick and his wife from Scotland, were named the ‘King’ and ‘Queen’ and quickly put on the most lavish costumes.

Purple xich lo (pedicab) leisurely carried the fascinated vacationers through shady streets along the Huong River before drawing to a stop in front of Van Lau Wharf, part of the Hue Royal Palace, where the sparkling royal boat was awaiting them.

Patrick the ‘King’ and his ‘Queen’ asked their ‘court officials’ to take a seat.

They were invited to an extravagant banquet comprising of two starters, five-dish main course and a dessert which were symbolic of Hue royal cuisine.   Premium wine which was meant exclusively for Nguyen kings and contained in sophisticated porcelain vessels was also served.

As the diners finished their starters, the royal boat was already cruising midstream.

As the vessel went past Truong Tien Bridge, another of the city’s icons, its engine was shut down.

The tourists then gathered upstairs to regard the idyllic riverside landscape with composure and unwind to the refreshing breezes.

As the boat quietly returned to its dock, the tour takers set free lighted flowered lanterns which conveyed their wishes for happiness and prosperity in the lunar new year.

“Thanks a lot for a wondrous, breezy dinner, impressive music and great services,” Rhyk, an Australian tourist, exclaimed.

“I’ve traveled to many countries, but this cruise is really special. I hope you will keep this form of tourism thriving,” Patrick the ‘King’ commented.

Kakada, a Cambodian tour guide, shared he has rejoiced in three such royal boat rides along the Huong River.

“The guests I take here every month all find the enchanting experiences a far cry from having meals at the restaurant. During my seven-year career as a tour guide, I’ve visited Hue for about 100 times,” he added. Nguyen Dinh An, who offers the Long Quang Royal Boat tours, said though the views are even more stunning on a summer moonlit night, the Huong River also glitters with an enigmatic allure on a rainy night.