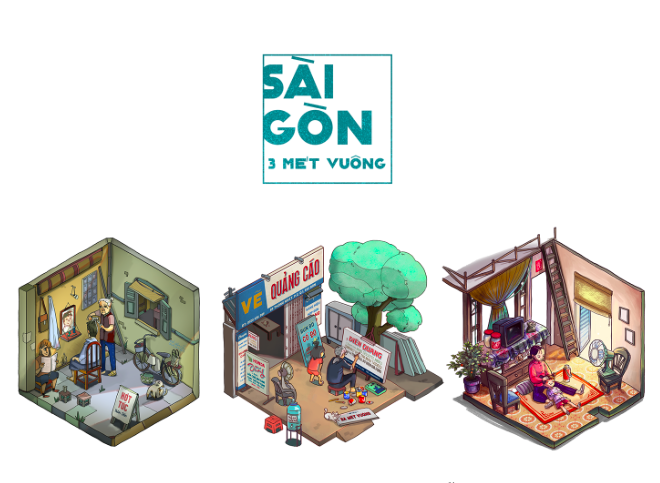 A group of young Vietnamese illustrators, known for their collection entitled “Saigon from behind,” has followed that up with another awe-inspiring project, this time depicting scenes from the city that may become a thing of the past.

The eight-member team, called Saigon Emoji, has been winning praise from online fans for their latest project, Saigon Ba Met Vuong, or Saigon in Three Square Meters, which depicts familiar slices of everyday life in the city, from the newsstand to a barber shop.

Saigon is the old name of Ho Chi Minh City that many locals still prefer today.

“With a little attention to detail, audiences will soon realize that the scenes featured in our collection are gradually disappearing and we’ll soon be unable to see them again,” Maxk Nguyen, the project’s creative director, told Tuoi Tre (Youth) newspaper.

Maxk revealed that the idea came to him recently while he was wandering the streets of Ho Chi Minh City, causing him to ponder whether he would still be able to see street vendors carrying bamboo yolks in 30 years' time.

“Will we still see newsstands in 30 years ?” he asked.

Maxk Nguyen said Saigon in Three Square Meters was created as an exhibition from the future, where the most typical cultural insignia of the city are displayed in three-square-meter sections.

In his previous project, Saigon From Behind, the young illustrators featured people from all walks of life and details of a soon to be bygone era, such as a rice noodle vendor serving dishes from a bicycle or people transporting ducks on motorbikes.

Asked why Ho Chi Minh City remains the core theme of the group, Maxk said that even though the city is so familiar, “every day I still find something new about it and I want to feature these new perspectives in my art.”

The creative director said his team members are yet to decide what will come next.

“We will continue looking for the next inspirational thing about this city,” he said.

Check out the nostalgic view of the city in Saigon in Three Square Meters below: