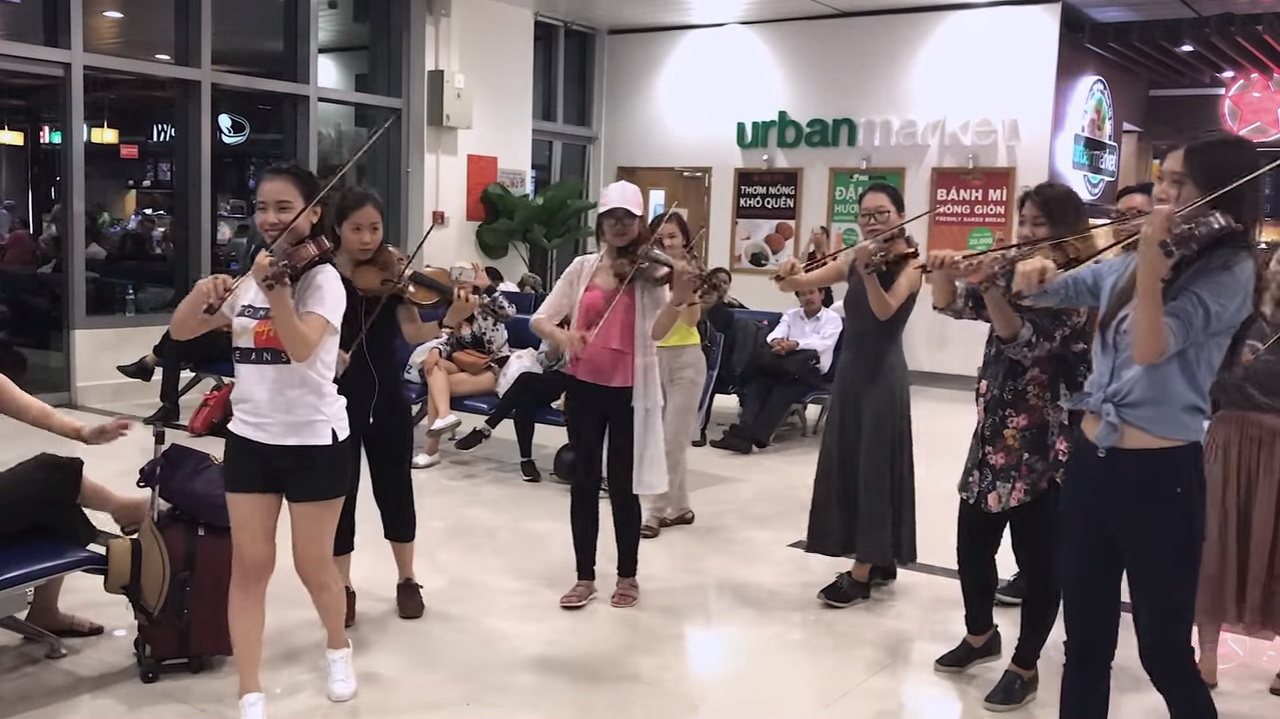 Members of a young Vietnamese orchestra staged an impromptu rendition of Pachelbel’s Canon in D while waiting for their delayed flight at Tan Son Nhat International Airport in Ho Chi Minh City on Monday.

Their spontaneous performance enthralled hundreds of other passengers until it was cut short by a concerned security guard.

In footage of the performance uploaded to YouTube, members of the Maius Philharmonic Orchestra can be seen stepping away from their seats at the airport’s waiting room and playing Canon in D, a classic work of the German Baroque composer Johann Pachelbel.

Approximately a dozen young musicians eventually gathered in a circle as the canon progressed, while hundreds of passengers stopped by to enjoy the performance.

The impromptu performance was cut short when a concerned security guard intervened.

“That was nice, but next time you guys should play somewhere else, as it is not allowed here,” the security guard said reluctantly.

According to Luu Quang Minh, conductor of the Maius Philharmonic Orchestra, the performance took place on Monday evening when 22 members of the orchestra were waiting for their flight to Hanoi after performing on Nguyen Hue Pedestrian Street in District 1, Ho Chi Minh City.

“Everything was spontaneous, and the positive reaction we received was totally unexpected,” Minh said. “We only wanted to ease the boredom of waiting for ourselves and other passengers.”

The Maius Philharmomic Orchestra was founded in 2015, consisting of young Vietnamese musicians who are known for performances that blend classical melodies with street performance.

Their previous orchestral renditions of iconic themes such as Wake Me Up, Pirates of the Caribbean and even the national anthem of Vietnam have received positive public feedback, attracting millions of views on the orchestra’s official YouTube channel.

“The spontaneous performance at the airport was the epitome of what we always aim to achieve,” Minh said. “That naturalness, approachability, unpredictability, and cohesiveness.”