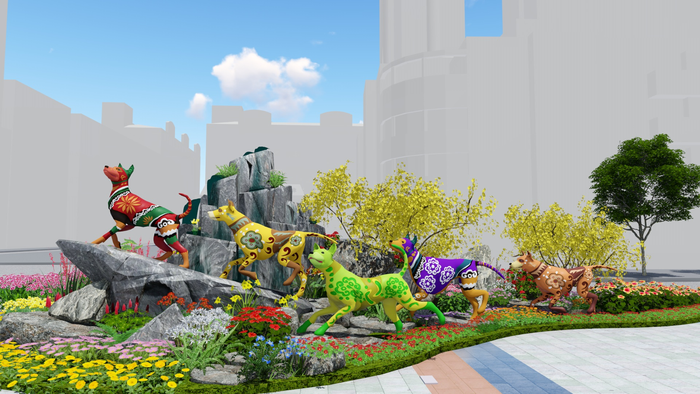 The Phu Quoc Ridgeback, a breed of dog native to Vietnam’s southern Phu Quoc Island, has been chosen as the mascot for next year’s flower show on downtown Ho Chi Minh City’s Nguyen Hue Street.

The city’s annual flower celebration is organized by the municipal administration in celebration of Tet, the Vietnamese Lunar New Year and Vietnam’s biggest national holiday.

The next lunar year, beginning on February 16, 2018, will be the Year of the Dog, as per the Vietnamese zodiac, a classification scheme that assigns an animal and its reputed attributes to each year in a repeating 12-year cycle.

With that in mind, organizers of the upcoming flower show have selected the Phu Quoc Ridgeback as the mascot for the massive celebration.

Characterized by a ridge of hair that runs along its back in the opposite direction from the rest of the coat, the Phu Quoc Ridgeback is best known for its athletic abilities, extreme loyalty, loving nature, and natural obedience.

The 2018 Nguyen Hue Flower Show will run the entire 720-meter length of the Nguyen Hue Pedestrian Street in downtown Ho Chi Minh City, with displays matching this year’s three main themes: ‘Spring in the City,’ ‘Integration and Development,’ and ‘Reach Out to the Future.’

A notable difference in next year’s flower show compared to previous editions is the erection of three welcome gates along the street adorned with statues of the mascot, rather than only a single main entrance.

The mascots will be cut from stereoboard and acrylic materials coated with bright-colored paints and are expected to tower up to 3.6 meters high.

The flower street will officially open to visitors from February 13, 2018 and will run until February 19. Admission is free.

Next year will be the 15th continuous year Ho Chi Minh City will have put together the flower show, an event which has become a trademark of the southern metropolis since its inception in 2004.

Have a look at these recently released computer-generated models of plans for the upcoming 2018 Nguyen Hue Flower Show in Ho Chi Minh City: