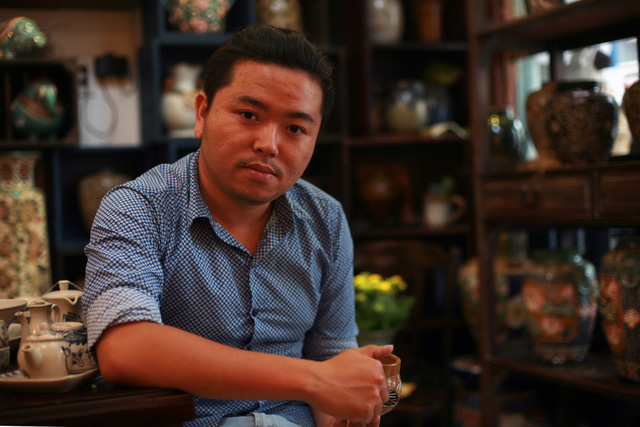 One Ho Chi Minh City resident has spent the last decade making a name for his Vietnam-made ceramic products in a domestic market dominated by Japan and China.

Over 100 restaurants, many of which are famous in the southern city, and a number of local residents use Yen Lam products.

The company’s path to success was not an easy one, however.

Periods of intense competition often forced Hai to draw on his creative prowess to keep the business alive.

Hai’s first failure occurred after he opened a shop specializing in traditional Vietnamese ceramics on a street in District 5, an area where Chinese ceramics have already replaced Vietnamese pottery.

The entrepreneur was undeterred by competition and created a line of aroma lamps, then unavailable in the local market, which garnered numerous orders from essential oil producers and put his company on the map.

However the appearance of Chinese-made lamps that sold at half the price sent his business in a downward spiral.

About five years ago, his business suffered another blow when Japanese pottery became a hot item in Vietnam.

Resignedly facing the reality, Hai became more inventive in his approach to the pottery business, introducing novel designs for a variety of ceramic products, each with its own distinctive signature beauty.

But success, in his view, is ultimately not for the sake of wealth. Self-enrichment was never the intent of Hai’s pottery aspirations.

“The only reason I set up the business is for the Vietnamese and for Vietnamese-made pottery,” Hai said.

He defines “rich” as relating, first and foremost, to his role in preserving the beauty of Vietnamese pottery, followed by the ability to do what one likes and help their employees.

Traditional ceramics and their philosophy have always fascinated him, with the former appealing to him from an early age.

Recognizing the esthetic advantage of Vietnam’s unique style of ceramics, he notes that it is characterized by natural but not very bright colors that help convey the fashioner's care and ingenuity, while Chinese counterparts tend to present elaborate patterns and colors and Japanese pottery shows drawings not quite familiar to the Vietnamese.