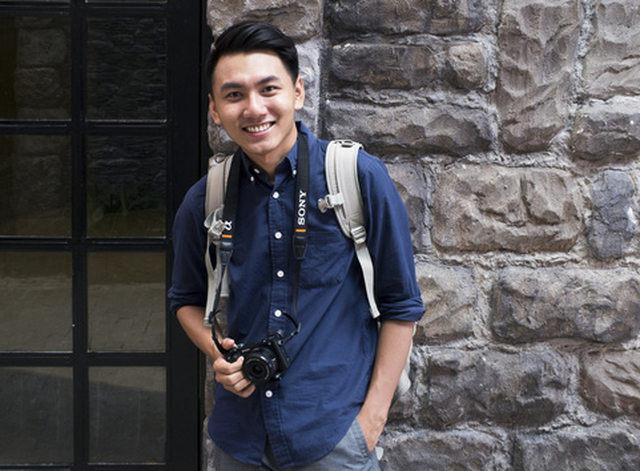 Despite his stable job, Hoai Phuong, a.k.a. Khoai Lang Thang (Wandering Potato), suddenly had a change of heart and started publishing videos on travel and foods.

Currently the owner of the Facebook fan page entitled Khoai Lang Thang - Food and Travel, with more than 85,000 followers, and a YouTube channel with 126,000 subscribers, Dinh Vo Hoai Phuong might surprise his fans with his academic background.

The journey to journeys

His first experience of travel came at the age of 15 when he got to Da Lat, a famed city in the Central Highlands of Vietnam, located around 300km to the northeast of Ho Chi Minh City.

Then, the young man made it to Da Nang City in central Vietnam, Can Tho City in the Mekong Delta, and Con Dao Islands, a magnificent island chain off the southeast coast of the country, all before his graduation.

Talking about his financial resources, he said he was burning the candle at both ends.

“I took a part time job during college,” he recounted.

“I would always set aside some of my monthly salary for my trips.”

After graduation, he worked as a design consultant at a large company.

When people questioned his motive for quitting such well-earned job, he said he was simply “following [his] heart.”

“Slowly traveling seeped into my blood and became such a burning passion,” Khoai Lang Thang said.

Making vlogs has become his way of life. A vlog, or video blog, is a trending term which refers to a kind of self-made videos telling about one’s experiences, like traveling.

“I had to think twice. Quitting a job means losses and gains, and I had to figure what those would be,” he added.

“I had to make sure I would be up for it if I happened to lose without gains. But it is not important whether the job is good or not. It matters more whether it suits me.”

Normally vloggers use their original footage of places where they go, with or without themselves in the frame.

Then they will process the raw files, adding subtitles and any special effects, before publishing their refined products on the Internet.

Telling of his first experiences filming himself on the go, he said people eyed him like an alien, for he was self-conversing.

But he soon got over his timidity.

“I could learn so many new things and got to meet bunches of interesting people,” he said.

The trips in turn added to his maturity and boosted his open-mindedness.

Once he was in the Mekong Delta. He got a chance to literally dabble his feet in the muddy water and harvest lotus plants, which was part of the local way of life.

The best thing about this one experience was the warm welcome the locals gave him. Phuong felt at home even when surrounded by absolute strangers.

“Life may be hard, but the people here made me feel just so optimistic about whatever it is to come,” he said.

Commenting on his vlogging, he revealed that he drafts a clear plan for each and every shot. He will then make proper modifications based on any faults.

At first, he had to keep his family in the dark about this career move, as to the Vietnamese people, having a stable job is highly sought after.

His friends indeed strongly objected to his decision.

Now, however, most seem to be supportive.

Talking about his future plan, he said he wants to cover all areas of Vietnam and make in-depth videos about the cultures therein.

“I will also add overseas journeys and boost video quality. I hope the channel can grow to an international level.”