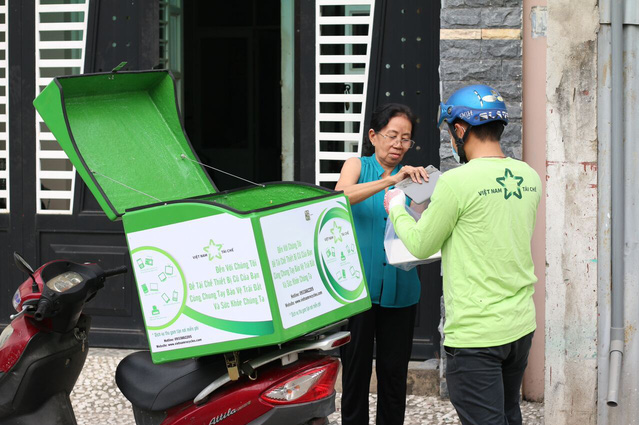 A number of young Vietnamese people dressed in mint green uniform have arrived at homes in Ho Chi Minh City and Hanoi in order to collect electronic waste for free, which is then subjected to proper treatment.

The activity is part of a project by Vietnam Recycles, a group run by a consortium of several electronic producers in an effort to diminish electronic waste, facilitate its recycling and protect the environment.

Any home with at least one large-size device like a television set or printer, or at least ten small devices can register for free pick-up service via the Vietnam Recycles website or mobile phone.

About 30 devices have been received this way from more than ten homes one week after the launch.

The waste is then professionally treated in an eco-friendly fashion, resulting in a maximal recovery of natural resources for future use.

This form of collection aims to make it easier for consumers to dispose of a large amount of e-waste and raise their awareness of the importance of environmentally sound recycling processes, Miriam Lassernig, spokesperson of Vietnam Recycles, said.

She added that some components in electric and electrical equipment are likely to imperil human health and the environment if improperly dismantled or removed, although they may pose no harm while being used.

The at-home collecting campaign is a way to spread the ‘green’ message to more people, said Nguyen Dinh Trong, a volunteer of Vietnam Recycles.

He also said a number of people asking for the service know the impacts of e-waste full well and express their hope that the campaign gains greater popularity.

Vietnam Recycles first appeared in Vietnam in 2015, and has hitherto collected about 15 metric tons of e-waste in this country.

The organization has additionally staged environmental protection events and positioned recycle trash cans at some locations throughout Hanoi and Ho Chi Minh City.