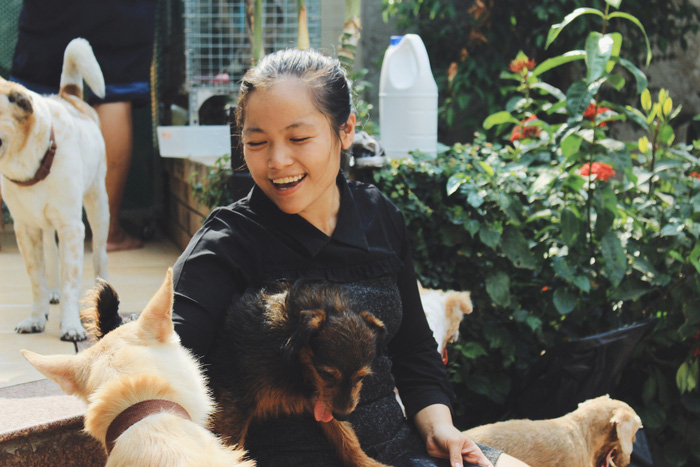 One woman in Ho Chi Minh City has spent the past three years making countless sacrifices to save dozens of homeless animals.

Tran Uyen Nhu looks after more than 85 dogs and 45 cats in two home-based facilities in the southern metropolis.

The 27-year-old woman is a key member of the Saigon Time Dog and Cat Rescue, a group established to care for stray cats and dogs.

The group’s current three-member roster was whittled from a much larger group that just could not handle the full-time commitment of caring for needy animals.

By Nhu’s estimation, the monthly cost of feeding and nursing the animals varies between VND10-15 million (US$439-658).

That money comes from a combination of the income Nhu earns as a wedding photographer and donations.

The group’s three members all share the responsibility of caring for their ‘babies,’ taking turns to prepare the eight kilograms of rice needed each day to feed the animals, washing them, and cleaning their small iron cages.

Nhu and her team even go as far as giving the animals cute names, such as Cat Tuong (‘Good Luck’), Dong Tao, Dom (‘Spotted’), and Nam (‘Fungus’), each name specifically chosen to fit the animals’ distinctive features or as a reference to the situation in which they were found.

All it takes is the mention of one of the animal’s names for Nhu to recall the life story of her ‘babies.’

Before being found and taken in, many of the cats and dogs cared for by the Saigon Time crew wandered the streets, surviving off scraps of garbage, and living with disabilities such as serious injury, blindness, and muscle atrophy in the hind legs.

“There are many difficulties, especially when I don’t have enough money to feed them. In certain circumstances, when we have no money and aren’t receiving financial donations, we’re forced to ask our parents for help,” she said.

Animals with severe injuries or diseases must be taken to a vet before they can be moved to one of Saigon Time’s shelter facilities.

The most memorable rescue, Nhu recalls, was when she and another member traveled more than 200 kilometers to Ca Mau – the southernmost Vietnamese province – to help a pair of old dogs sold by their owner to a slaughterhouse.

“As soon as we got the news, we rushed there on our motorcycle. We drove at night and depended on Google Maps for directions. Luckily, we were able to save the dogs,” she said.

Nhu and her boyfriend of ten years, Khanh, had intended to celebrate a wedding last year, but instead chose put their savings toward caring for the animals.

They say looking after the cats and dogs has only brought them closer together.