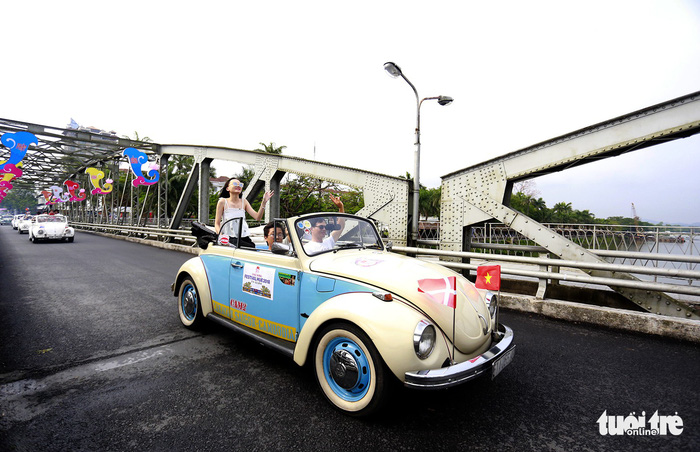 The procession, comprised of 44 Volkswagen automobiles, whose owners come from all over and 30 Vespa scooters from the municipal Vespa club, paraded around Hue, Vietnam’s ancient capital, in a program jointly held by the city’s tourism department and its Ho Chi Minh City counterpart.

The event was just prior to the opening night of the week-long Hue Festival.

The old-time vehicles commenced their tour at the Hue Information and Cultural Centre, before traveling slowly through the city’s famous landmarks such as Truong Tien Bridge, Dong Ba Market and the Hue Train Station.

The demonstration attracted a huge commotion from the locals, who apparently have never seen those famous classic automobiles in real life before.

According to Nguyen Manh Hung, president of the Saigon Volkswagen club, some of the vehicles joining the line-up that came to Hue this time, have been around for more than half a century, such as the 1960 Volkswagen Beetle and the 1959 Volkswagen Kombi Deluxe.

“This is an ideal occasion for us Volkswagen fanatics from all over the country to unite and meet up in a while,” Hung said.

“We can also promote the image of Thua Thien – Hue Province to boot. It’s like killing two birds with one stone.”

Besides the parade, the delegate will also make a stop here and there, such as Nghinh Luong Duong Square, Le Duan Street, Ham Nghi Square and 23-8 Street, to showcase the Volkswagen ‘collection’ to the mass.

Hue Festival is a bi-annual event served to illustrate the abundantly enriched culture as well as unique features of Vietnam to the international.

With its various activities revolving around the topic “Cultural Heritage in Integration and Development”, this year’s festival runs from April 27 to May 2.