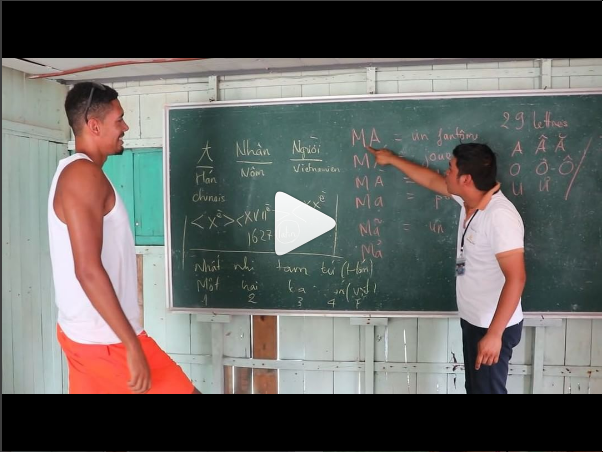 While the Three Lions are gearing up for their 2018 FIFA World Cup opener against Tunisia on June 19, an English football star was busy himself studying Vietnamese at a world-renowned attraction in the Southeast Asian country.

Manchester United defender Chris Smalling appears to be enjoying a summer off in Vietnam, after being overlooked by his national team’s manager for Russia 2018.

Instead of resting in his homeland, he decided to jet off to Vietnam with his wife Sam for an escape earlier this month.

On Thursday, the 28-year-old uploaded a video on his verified Instagram, showing him getting taught some Vietnamese phrases.

Captioned “It’s safe to say I won’t be coming back home fluent in Vietnamese,” the short video shows a local tutor reading the word ‘ma’ in six different tones of the Vietnamese language, and the ‘English student’ repeating after him.

As Smalling went through the list of words, giggles can be heard behind the camera from Sam, who filmed the footage.

The video gave a blast of joy to many Manchester United fans, both Vietnamese and international, who could not help laughing at Smalling’s attempt to learn Vietnamese.

“Hahaha what is going on?” one commented under the Instagram video.

Other comments read, “Classic Chris Smalling” and “The funniest thing I’ve seen for a while.”

One Vietnamese fan chimed in, saying, “His pronunciation is actually good.”

Smalling and his wife have been in Vietnam for more than a week, after touring Thailand.

The couple visited some villages in Hanoi and then traveled to the tourist town of Sa Pa and Ha Long Bay.

Chris and Sam have been constantly updating their trip in Vietnam on their personal social networking sites.

Last week, a video of the Manchester United center back playing shuttlecock, which he jokingly dubbed “badminton football,” on a Hanoi street also excited many Southeast Asian football fans.