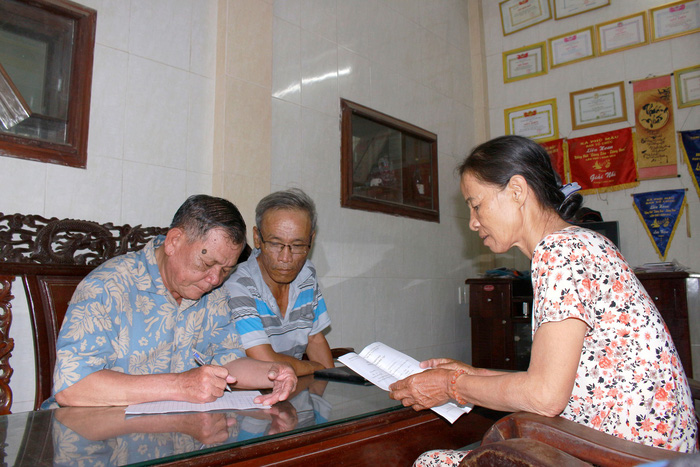 A father and his son are popular with a disadvantaged, illiterate community in central Vietnam as they have been willing to help the grass roots with giving names to infants, paperwork, daily interpersonal matters and education.

In the past, 64-year-old Vo Van Ken and his son Vo Van Thuong were members of a community who lived only on wooden boats along Huong (Perfume), a very famous river in Thua Thien-Hue Province, because they did not have any land to build houses on.

The group had very limited access to healthcare services and education and was beset with social issues of their area, which is part of the provincial capital of Hue, Vietnam’s ancient royal capital.

About ten years ago, local authorities decided to provide settlements to the community, consisting of some 3,000 ‘boat residents’ coming from 339 families.

Ken has given assistance to the local residents, being their de facto ‘village leader’ for over 40 years, before officially taking the post upon their settlement.

Local adults usually ask Ken to give their newborns a name since they are mostly uneducated and even illiterate.

“I named about 95 percent of the children in the village,” Ken said, underlining that their parents could only christen their children with simple names, actually nicknames, like Cu Anh (Older Boy), Cu Em (Younger Boy), Be Chi (Older Girl) and Be Em (Younger Girl) with no surnames.

The local people also ask Ken to handle averagely ten official documents every day, turning his living room into what serves as a 'public servant office' that is sometimes visited by several dozen villagers in need of help.

After taking his post as the official village head, Ken has played a key role in resolving domestic conflicts, arguments between neighbors, land disputes, and physical fighting by youth.

“Ken wins trust from people in the village. He knows their problems full well, like those involving public security and social welfare,” said Tran Hieu Co, a local government leader in Thua Thien-Hue.

“He’s made the greatest contribution to giving a better life to the people here,” Co added.

Many poor fishermen in the area are indebted to Ken as he tried to find employment for them by contacting vocational training centers, industrial zones and factories.

His son, Thuong, has also earned a high reputation thanks to his kindness shown to the community’s younger generations.

The man, around 30, has run extra classes in the hall of a government building for local children from elementary to high school grades over the past 12 years, despite his multiple job and family commitments.

The classes, held three times a week, have been attended by over 40 students who need to learn to read or gain a better understanding of what has been taught in school.

For lazy children unwilling to come, Thuong directly knocks on their house’s door, pulling them to the extra classes.

Thuong’s homespun tutoring efforts started years ago, in his high-school time, when he was often seen moving his boat with a pole along the Huong River to visit other boats where children lived, and take them to his class on an islet in the river.

Thuong said the devotion to the children’s education has been inspired by his father and maintained by their academic performance.

“It’s my everyday happiness to see that the classes have been effective and the students are more and more industrious. That also motivates me to improve the classes in the future,” Thuong said.