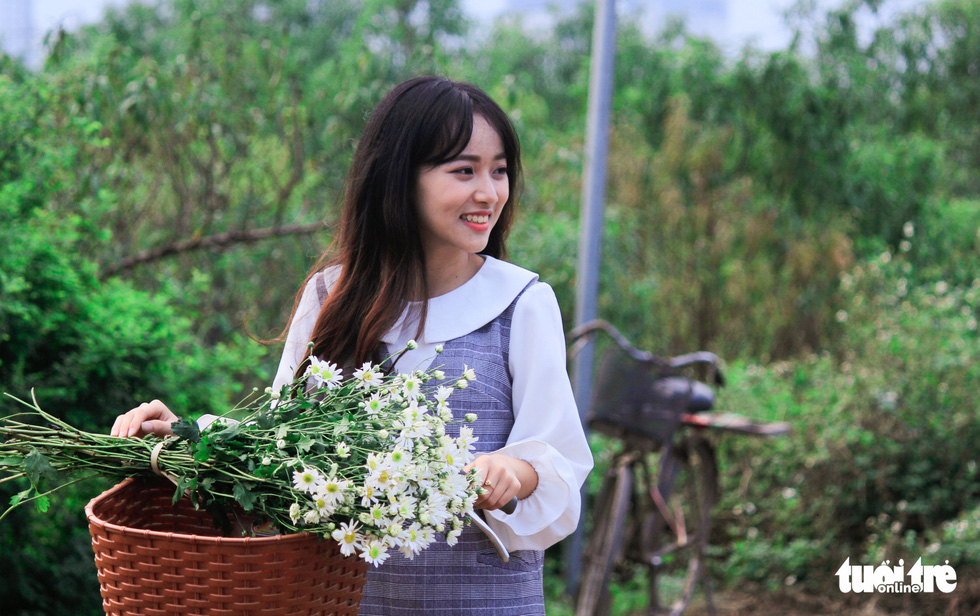 As temperatures in Hanoi slowly inch toward winter, the cold triggers daisies around the city to blossom, adding natural decorations to the capital’s streets.

For Hanoians, early November means it is time for white daisies to make their annual appearance throughout the city’s streets, creating the perfect backdrop for a new collection of selfies.

Locals have long viewed the blossoming daisies as a yearly marker that the cold season is just around the corner in Vietnam’s capital. In a month’s time, the beautiful white pedals will wither and winter will be in full swing.

Though some of the flowers have already begun to bloom, the majority are expected to blossom over the next few days.

That has not stopped many youngsters from jumping the gun to snap photos with these “early birds” at the Nhat Tan flower garden in Tay Ho District.

Nhat Tan is one of the most well-known flower gardens in Hanoi and Vietnam, where dozens of flower species are grown for both sale and exhibition.

Linh, a student at National Economics University in Hanoi, admitted that even though she is not a Hanoi native, she holds a special place in her heart for the blossoming flowers.

“Hanoi’s daisies are soft, beautiful, and not too colorful,” Linh said as she posed by the flowers.

“It is beautiful when girls take photos with these photos."

Florists throughout the city are also eagerly awaiting the flowers to come into full bloom.

“In just five days to a week, the yellow pistils will flood the streets of Hanoi,” a florist at the Nhat Tan garden reassured.

“I am not going to cut and sell these flowers. Instead, I’ll leave them for visitors so that even if they come late they won’t not miss out,” one of the Nhat Tan gardeners said, pointing out that the flowers only blossom once a year.

Here are some of the photos taken during the daisy blossom season in Hanoi:

Cold spell to lower temperatures in northern Vietnam this week