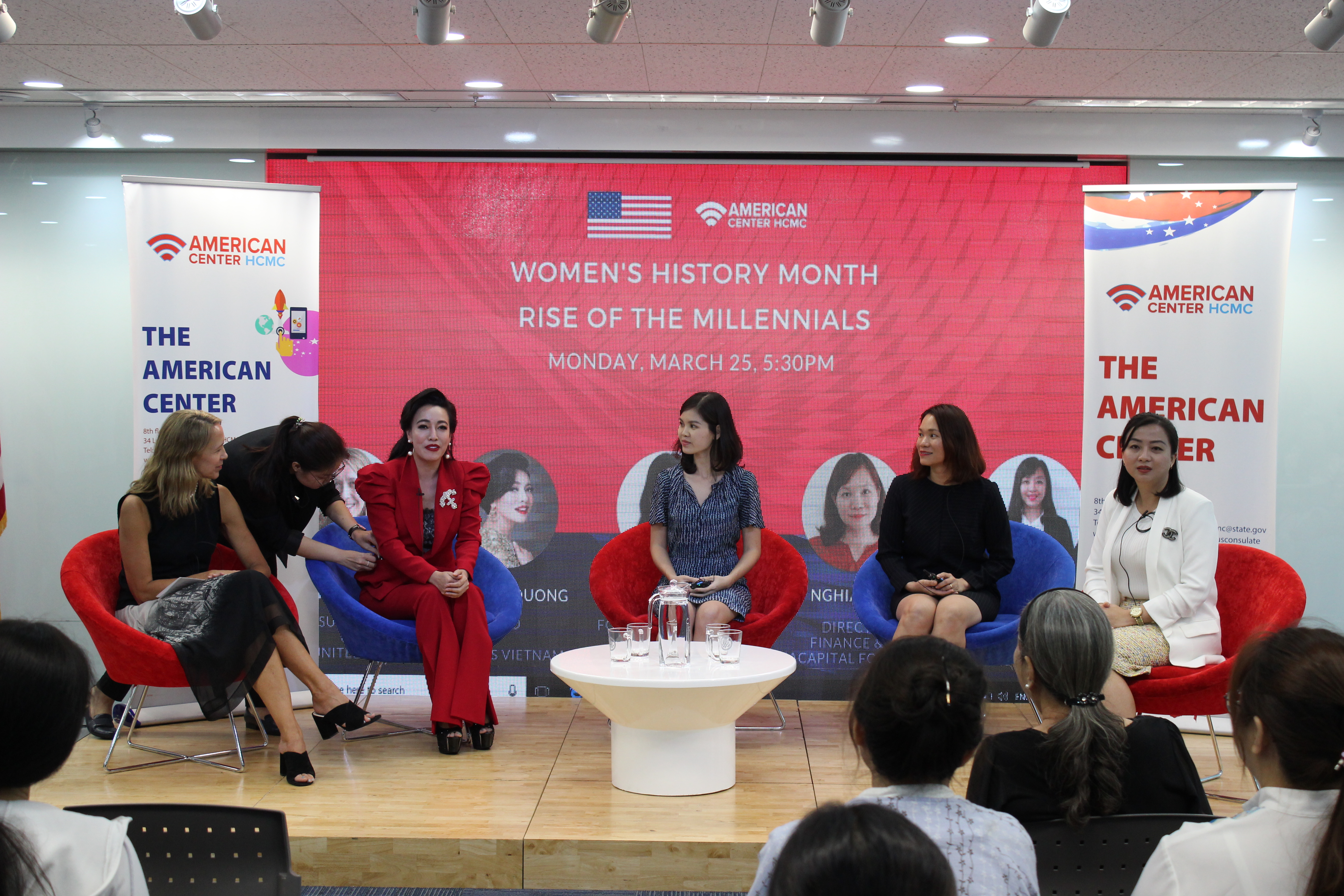 Vietnamese women on working in Vietnam: Don’t be Wonder Woman

Four successful Vietnamese women shared the challenges and opportunities they face as female professionals working in Vietnam at a panel discussion held by the U.S. Consulate in Ho Chi Minh City last weekend.

Though Vietnam has several laws in place to help curb workplace inequality between men and women, many female professionals throughout the country say they still feel as if they are perceived as the weaker sex in the Vietnamese business environment, creating a unique set of hurdles for females to overcome in the workplace.

Others, however, say that the perception of Vietnamese femininity is an advantage, with several successful women claiming that being a woman makes the more approachable to their male colleagues.

To discuss the issue, a group of successful Vietnamese women took part in a panel discussion, titled “Women’s History Month: Rise of the Millennials,” hosted by the U.S. Consulate General in Ho Chi Minh City on March 23.

Moderated by Consule General Mary Tarnowka, the discussion focused on female leadership in the workplace as well as generational shifts which have effected modern working environments.

Though the perception that women are the weaker sex is not distinct to Vietnamese culture, according to Van, the ability of Vietnamese women to capitalize on that perception gives them the advantage of being “flexible like water.”

Sharing a similar opinion, Nghia shared that she feels she is able to build closer relationships with her employees because, she says, being a woman allows her to express deeper sympathies towards her employees.

“The success of an organization depends its human resources. There is nothing more valuable than that,” Huong said, adding that “people’s skills and talents are every company’s biggest asset” – references to the powerful influence woman can often exert on an organization and the ability of female leaders to bring out the true potential in their employees.

According to Huong, women are privileged with innate soft skills with allow them to be more generous and more likely to support others, contributing to the development of the kind of supportive, motivational, and healthy working environment people desire to work in.

Women are good listeners, and “as long as staff feel like they are listened to and that their opinions matter, they are more likely to contribute to the success of the company because their efforts become meaningful,” said Nhu, the youngest panelist at the discussion.

Working in a male dominant industry became an advantage for Nhu as she quickly found the essence of empowering others to speak up.

Being active in encouraging open conversation quickly translated into unbreakable trust from her employees, who she now considers her friends.

‘Don’t be a Wonder Woman’

All four panelists also acknowledged the difficulties they face as women in the workplace.

“Do not try to be a Wonder Woman,” Van said after sharing how feeling like a weaker counterpart in the workplace pushed her to compensate by challenging her employees to the point that they said she was “hard to work with.”

“I felt like I had to show my power so I became everyone’s nightmare,” Van recalled of the negative reactions she received from her peers, explaining that no one was willing to work with her.

Another common difficulty was family, Nghia, a mother of two, said.

“In order to be here I had to spend a lot of time working, and my job requires lots of travel,” she said.

“I do not want to feel guilty for trying my best at work and dedicating myself to my job,” Nghia shared while agreeing that she feels guilt at times for not being able to spend more time with her daughters.

In order to reduce the guilty feeling, she talks to both of her daughters about the nature of her work and why what she does is important.

“Understanding is the key,” the successful mother believes.

Huong understands those difficulties as well, so she does her best to create a supportive environment where mothers are allowed to work from home after giving birth and are allowed to limit their schedule to three or four days a week.

“As long as they deliver tasks responsibly, it should not matter where they work. If being at home with their family makes them happier, then why not?” the Forbes CEO said.

Nghia also added that what prevents many women from success is their lack of confidence, resulting in less opportunities and more challenges.

Hence, she encourages her female employees by assigning them with tasks that may seem overwhelming to them while also being by their side to assist them the best she can so that at the end, they will see their true capability.