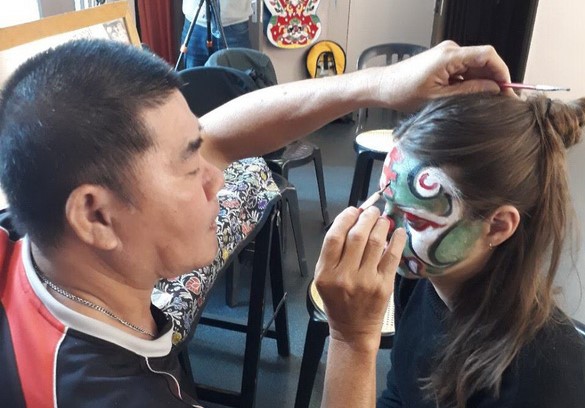 A Vietnamese man devoted to preserving and performing cai luong tuong co has become the first of his country to be invited to Paris to teach this form of Vietnamese folk theater art.

Cai luong typically highlights and praises Vietnamese moral values, either through stories about modern Vietnamese society or based on a tale, legend or historical story of the feudal system, with the latter falling into the tuong co (ancient form) category.

Local artist Thanh Son is a cai luong tuong co expert who now works at the faculty of folk operas of the University of Theatre and Cinema Ho Chi Minh City.

Son was born into one of Vietnam’s most famous cai luong families. As the great grandson of Minh To, a legend in the cai luong tuong co world, Thanh Son has followed in the footsteps of many of his family members, hoping that the art form will be preserved for generations to come.

His efforts have been so successful that they earned him an invitation to teach a short term cai luong tuong co course at Le Mandapa Theater in Paris in March.

The teaching offer came after the theater’s director was show video footage of Son acting in a cai luong tuong co play by a Vietnamese employee, who is also a descendant of Minh To.

Students from countries around the world, including Italy, France, and Chile, and Vietnam attended the course, and all were wowed by the detail involved in the art form.

“I taught them how to do face-painting and transform themselves into different characters, how to sing, and how to do traditional choreography,” Son said.

At the end of the course, the theater director allowed Son to give a solo performance of his own, as well as a performance with his students at Le Mandapa.

“The director cut out my photo and put it over Vietnam on the world map at the theater,” Son said. “That touched me and made me proud for being able to promote our folk art to the world.”

After conducting the course at Le Mandapa, Son was invited to work as a guest lecturer at a German music school in France.

One of Son’s American students also suggested that Son travel to the U.S. to teach and perform, but Son declined the invitation due to his busy schedule.

Though Son has had his share of success in promoting cai luong tuong co internationally, he has not forgotten his mission of keeping the art form alive so that Vietnamese youth don’t turn their backs on their country’s traditional folk theater.

Son used to hold annual performances at Quan Am monastery in Dong Nai province, located around 100 kilometers to the north of Ho Chi Minh City. A group of about 30 local youth would typically attend his events.

“In addition to teaching at the university, I also rented a small venue in District 5 where I could teach young people,” Son said.

“Since I do not have enough resources to my classes at a proper theater, we hold cozy performances for those who are truly passionate about cai luong tuong co,” he added.

Thanh Son has dedicated his life to developing this unique but traditional form of musical art which is slowly falling behind of youngsters’ lives, and his efforts are highly appreciated and respected.

“He has a house for rent for a comfortable life but because he is passionate about the profession and wants to inspire others he still teaches for little pay,” Le Nguyen Dat, head of the faculty of folk opera, said.