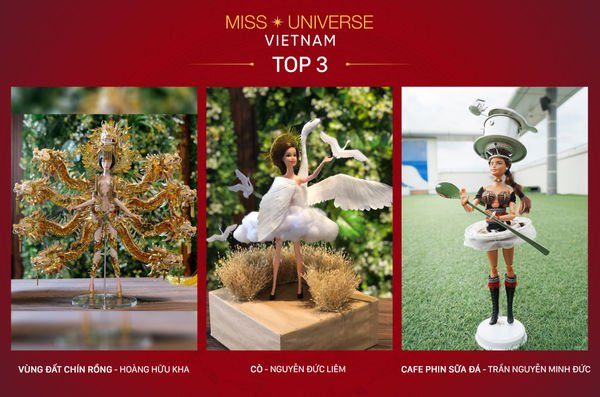 An entry of a contest aimed at finding the most impressive outfit to represent Vietnamese culture at Miss Universe 2019 has failed to make it to the top three, after all the controversy surrounding the designer’s bizarre idea of making an altar-inspired dress.

Beauty queen Hoang Thuy, the first-runner up in the Miss Universe 2017 pageant, will represent Vietnam at Miss Universe 2019, with a design contest being held to choose the national costume she will don at the international competition.

The top three of the competition was announced on the official Facebook page of Miss Universe Vietnam 2019 on Tuesday, with the most controversial entry, a design entitled “Ban Tho” (Altar) by Pham Quang Minh, not among the finalists.

Minh, who drew inspiration for the outfit from Vietnam’s tradition of commemorating and worshipping familial ancestors, caused a stir with his design when it was introduced to the public for the first time in May, with people criticizing its likeness to such a sacred Vietnamese cultural icon.

The ‘altar dress’ design, which depicts a traditional altar complete with a photo, incense container, flower vase, and offerings, all necessary components of a traditional Vietnamese altar, did make it to the top 18 round, where designers had to present their ideas before a panel of judges.

Minh, who secured his Top-18 berth as one of the five entries that received the most votes from an online poll, just failed to convince the judges of the appropriateness of placing an altar with an incense container on a person's butt and breasts.

In the meantime, the designers of the top three entries all won the judges’ hearts with their outstanding outfits and their implied messages.

The “Cafe Phin Sua Da” design was praised for its bold idea of bringing a Vietnamese popular drink onto the fashion runway, while “Co” skillfully brings the peaceful scene of a typical Vietnamese village to a dress.

The three finalists will turn their designs into real outfits under the instructions of three professional designers to compete in the last round, where the judges will single out the winner.

The Miss Universe Vietnam 2019 has yet to announce the schedule of the last round, whereas the Miss Universe Organization has made no statement regarding where the beauty pageant will be hosted as of Wednesday.

The costume design contest, which calls for local fashion designers to submit their ideas for Vietnam’s national costumer at the Miss Universe editions, has been held annually since 2016.

Last year, an ‘out-of-the-box’ idea to recreate banh mi, the famed Vietnamese bread, as a dress won the contest to officially become the national costume of Vietnam, worn by H’Hen Nie at the Miss Universe 2018 in Thailand. H’Hen advanced to the top five of that contest.