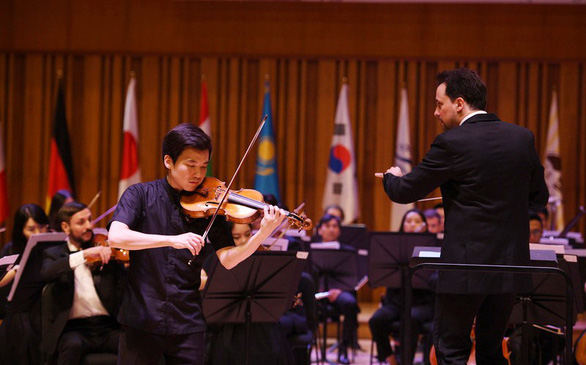 The inaugural Vietnam International Music Competition for Violin and Chamber Music (VIMC) 2019, which took place last week, is seen by industry insiders as helping to give local talents of this form of art a new opportunity to meet and exchange with their global peers.

VIMC, running from August 6 to 11 at the Vietnam National Academy of Music in Hanoi, is only the second international classical music competition Vietnam has played host to, after the Hanoi International Piano Competition, which has been held annually since 2013.

Vietnamese classical music talents now have a new playground to ‘compete’ with musicians from around the world, as the competition attracted many talented young artists with great potential.

French conductor Olivier Occhanine said after the semi-final night of the violin category that he was surprised to see the quality of the contestants of this competition.

Considering many of them are still students around 19 years old, they all have a great potential, Occhanine said.

The French conductor underlined that it is good for VIMC to have been able to attract quality contestants for the contest right from its inaugural edition.

Vietnamese musician Bui Cong Duy, the chief judge of VIMC, said that just because this is the first time the contest has been held does not mean judges and organizers would keep the bar low.

The judge panel had worked carefully and only awarded prizes to those who most deserved them.

Ruslan Turuntayev from Kazakhstan and Park Gang Hyeon from South Korea were winners of the competition’s Grand Prix for the violin category.

The two violinists not only proved themselves with their talent and mesmerizing performances but also wowed the audience by giving their best at the finale on August 11, despite having spent two consecutive days performing with the orchestra.

Famous Hungarian violinist Vilmos Szabadi, one of the judges, remarked that Park Gang Hyeon will be one of the familiar names among Asian classical music performers within the next two years, if he keeps on competing.

Other contestants were not far behind as they all showcased their potential and talent after years of pursuing classical music at the competition in Hanoi.

This performance required a high level of synchronization from the performers, according to judge Mark Levinson.

The violin category at the VIMC attracted 29 contestants, but only five of them are Vietnamese.

In the chamber music category, Vietnamese representatives made up seven out of 11 contender groups.

“The number of groups of the host country competing in the chamber music category is proof that Vietnamese youngsters are properly pursuing classical music,” Duy, the chief judge, remarked.

Van, who started learning violin when she was four, had attended the Vietnam National Academy of Music before she landed a scholarship at Academy Liszt Ferenc, a famous musical school in Hungary.

Even though Van was unable to beat her competitors, she still received many praises and good feedback from the judges.

Professor Lorenz Gamma, an internationally known professional violinist, hailed Van’s performing technique and her independence when dealing with a piece of music.

The professor noted that the young Vietnamese still needs more experience to perfect her performing skills.

Even though Vietnamese musicians did not perform well at VIMC, the Vietnam National Academy of Music was proud of their students for having tried their best.

VIMC was a great opportunity for them to experience an international-level competition, according to the academy.