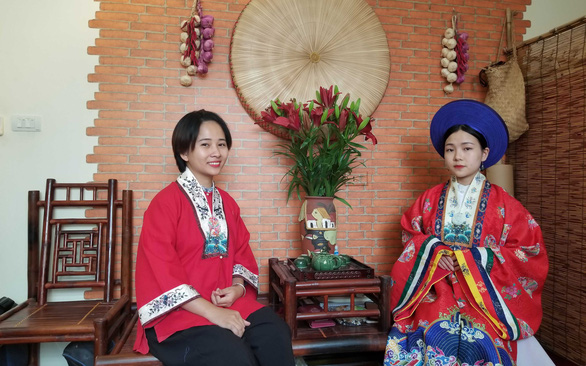 Tran Thi Trang smiles brightly, sitting in a less-than-ten-square-meter room decorated in an antique style in an alley in Cau Giay District, Hanoi, as she tells Tuoi Tre (Youth) newspaper the story of her unique business in fashion.

Looking like she has just stepped off the set of a Vietnamese historical drama, the 27-year-old woman is wearing a red modified “nhat binh” dress, which literally means square-collared garb and was one of the casual clothes of the empress dowager, empress consort, and princesses in the imperial city of the Nguyen Dynasty (1802-1945) – the last monarchy in Vietnam.

Trang is the owner of a clothing store that specializes in Vietnam’s ancient dresses, typically worn between the Ngo Dynasty (939-965) and the bygone imperial era of the Nguyen family in the 19th century.

The woman was inspired to start her fashion business about three years ago when the revival of ancient costumes was influencing many young Vietnamese people.

“Young people show great interest in traditional costumes, but the majority of the garments come from Japan, South Korea, and China,” said Trang.

“So I think why I don’t make Vietnamese costumes, which are definitely gorgeous and abundant.”

Trang spent two years reading and finding references from different sources to understand the features and essential quality of Vietnamese ancient dresses to transform them into clothing that is applicable in modern life but still keeps the traits of the traditional culture.

“The ancient dresses are generally long and large with overlong sleeves, and garish with bright, showy colors and patterns,” Trang said.

“Therefore, I change the patterns into simpler ones, choose plainer cloth, and make narrower and shorter sleeves so that customers won’t find the costumes inconvenient for daily life.”

The first Vietnamese ancient costume Trang made was a “nhat binh” dress.

“I sewed [the dress] for myself to don it during the Lunar New Year, but unexpectedly attracted great attention after I uploaded a photo of the costume on social media,” she recounted.

“So many asked to buy the dress that I ran out of stock within one day.”

Now, after one year in the business, the woman is familiar with how to design the form of a dress, picking which pattern to match the garb, and choosing a suitable clothing size.

“The most difficult stage is realizing the dress from a paper design, as only one-centimeter difference can ruins the whole garment,” the woman said.

Additionally, she hopes that the modified traditional costumes will spark healthy curiosity from young people to learn about the original ensembles, from which they will get more understanding of the traditions and culture of the country.