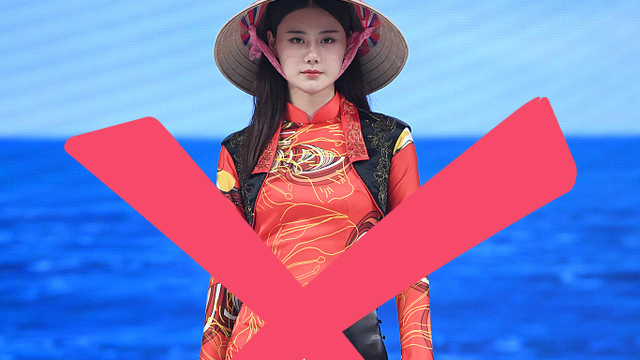 A Chinese fashion brand has been accused of appropriating the ‘ao dai,’ Vietnam’s traditional long gown, for its “Chinese style” collection showcased at a fashion week in Beijing last year.

It is unclear why an old online report published by China Daily, an English-language daily newspaper owned by the Chinese government, on October 26, 2018 has recently surfaced on social networks in Vietnam.

The report introduced a fashion collection designed by NE Tiger, a Chinese clothing brand, which had been showcased on the opening day of the China Fashion Week Spring/Summer 2019 in Beijing, China the previous day.

A majority of the collection comprised designs that appear indistinguishable from Vietnam’s iconic ao dai, which is a long tight-fitting silk tunic worn over trousers.

Models donning these outfits even wore the ‘non la,’ or palm-leaf conical hats, that often go along with the ao dai as symbols of Vietnamese culture and fashion.

In the China Daily report, terms such as “Chinese style” and “new creation” were used to describe the costumes in NE Tiger’s collection.

Many Vietnamese readers have found it offensive that such Vietnamese fashion-inspired designs are dubbed “Chinese style” by Chinese media and voiced their anger on social media, calling it another one of Beijing’s attempts to spread its “soft power”.

The online outrage went even further when Vietnamese fashion designer Thuy Nguyen took to Facebook on Thursday afternoon to accuse NE Tiger of copying one of her designs in an ao dai collection introduced on January 24, 2018.

According to the Chinese state-run Xinhua News Agency, the NE Tiger collection was part of the fashion week’s opening show under the theme of “The Silk Road,” which showcased designs inspired by the exotic cultures of more than a dozen countries along the maritime Silk Road.

The design team of the Chinese fashion brand had attempted to demonstrate cultural features of Southeast Asian countries along the Silk Road on garments meant for Chinese people, Xinhua News Agency said.

The news agency said that NE Tiger combined traditional costumes during Ming Dynasty, which ruled over China from 1368 to 1644, and cheongsam, a type of feminine body-hugging dress with distinctive Chinese features of Manchu origin, with pants, hats, shirts, and accessories typical to Southeast Asian countries in the collection.

Xinhua claimed that cheongsam spread to Southeast Asia and was remade with lighter, ‘mosquito repellent’ fabric materials due to the local hot weather.

Vietnamese readers, however, opposed to this statement, saying that Vietnam’s ao dai has several distinctive features that differ from the Chinese cheongsam.

The Chinese international English-language news channel CGTN quoted fashion designer Zhang Zhifeng, the founder of NE Tiger, as saying that he emphasizes the beauty and dignity of traditional Chinese clothing when creating collections.

While preserving tradition, he has also been paying close attention to blending in a modern vibe and recent global elements in his designs to target international customers, Zhang was quoted as saying at the China Fashion Week Spring/Summer 2020, which opened on October 25 this year.

Zhang Zhifeng founded NE Tiger in 1982 and trademarked the fashion brand with the State Administration for Industry & Commerce of China in 1992.

The company has also registered NE Tiger as an international trademark in both Chinese and English versions in Madrid, Spain, as well as in a number of other countries in accordance with the Madrid Agreement Concerning the International Registration of Marks.

It is now one of China's leading fashion brands.