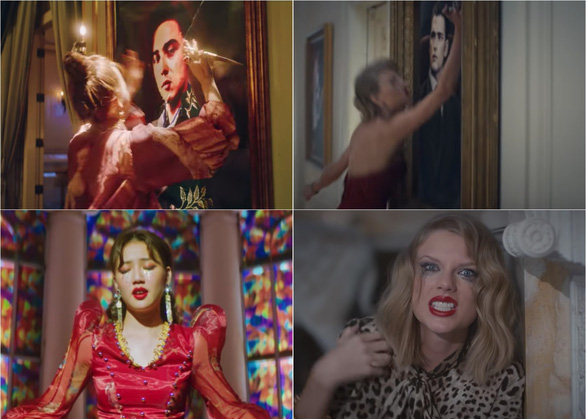 A young Vietnamese singer has been accused of ripping off the billions-view “Blank Space” music video by American country-pop star Taylor Swift in her new music video.

The video hit one million views after four hours and were standing at No.1 on YouTube’s top trending videos in Vietnam on Saturday morning.

The team behind the music video said its plot is insprired by different Disney characters, including Aurora amd Maleficent from Sleeping Beauty, Cinderella from Cinderella, Rapunzel from Tangled, Snow White from Snow White and the Seven Dwarfs, and Belle from Beauty and the Beast.

However, the video is now being compared to that of ‘Blank Space’, a 2014 hit by American singer-songwriter Taylor Swift that has racked up more than 2.5 billion views on the same platform.

Facebook users were quick to point out that both female singers transformed into a jealous, doubtful and wealthy woman who lives in a grand castle with a handsome lover, in their respective music videos.

Moreover, AMEE’s shots in the latter part of Sao anh chua ve nha such as sitting at a hearty dining table, mascara running down her cheeks as she cried, and slitting a portrait of her lover over suspicion that he is having an affair, bear striking resemblances to Swift’s shots in Blank Space.

The only difference, fans argue, is that Taylor Swift's acting is more satirical and violent, while the young Vietnamese singer acts in a humorous and feminine way.

The administrator of Taylor Swift Vietnam FC, a Facebook community of Vietnamese fans of the American female singer, put together a collage of these shots and uploaded them in a post that reads “The ‘Sao anh chua ve nha’ MV by AMEE copied the idea of Taylor Swift’s ‘Blank Space’ MV?”

Some Facebook users asserted in the comments under the post that AMEE’s music video plagiarizes Swift’s product.

Tuoi Tre (Youth) newspaper has reached out to the production team of the video for their comments regarding the controversy.

They admitted Taylor Swift was an inspiration for the music video, saying they consider Taylor Swift as a “princess,” like every other Disney princess being featured in AMEE’s music video.

The team said that Taylor Swift came to their mind when they were brainstorming about the shots describing a jealous woman, who is raging over a suspicion for her lover.

“We thought of Taylor Swift as we are all her fans,” a representative of the team said.

“We thought, why not? Taylor is also a princess – a country music princess. So how can a universe of princesses be without her?” the representative added.

“If this makes the Swifties unhappy, we are very sorry and will learn from the experience. But definitely, our work comes from respect of a fan to their idol,” the representative affirmed, referring to the name of Taylor Swift's fandom.