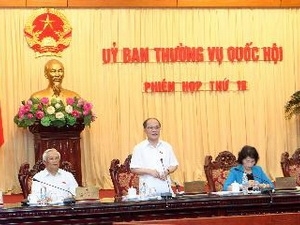 Under the chairmanship of National Assembly Chairman Nguyen Sinh Hung, the 18th session of the NA Standing Committee opened in Hanoi on Tuesday, focusing on preparations for the fifth sitting of the 13th NA expected to begin on May 20.

At the session, Hung asked the committee members to evaluate the country’s socio-economic performance and the State budget’s activities, and discussing measures to implement the socio-economic tasks set for 2013.

The delegates will review the agenda for the fifth sitting of the NA, including the draft revised Land Law and the draft amendments to the 1992 Constitution.

Hung put an emphasis on the need to conduct confidence votes on officials holding key positions elected or approved by the NA or People’s Councils before the NA’s fifth sitting, considering it as a significant move to concretize NA’s supreme supervisory rights.

During the session, delegates will hear several reports, including the Government’s supplementary reports on the socio-economic development and the State budget’s operations in 2012 as well as in the Jan-May 2013.

The NA Committee will also discuss the report on the implementation of budget estimates in the first months of 2013 and related evaluation reports by NA agencies.

In the first quarter of this year the economy showed positive signs, including the GDP growth that reached 4.89 percent, up from 4.75 percent year on year, the Committee said.