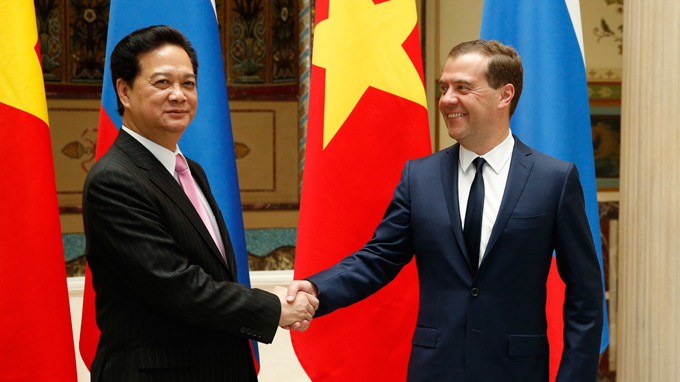 As part of his official visit to Russia, Prime Minister Nguyen Tan Dung held talks with his Russian counterpart, Dmitry Medvedev, in Moscow on May 14, discussing measures to promote the comprehensive partnership between Vietnam and Russia. The two PMs agreed that both countries need to increase cooperation in politics, economics, trade, investment, national defense, security, science, technology, education and training. They affirmed their determination to implement high-level agreements on strengthening the comprehensive strategic partnership between the two countries. They agreed that Vietnam and Russia have made great stride in bilateral economic cooperation, with a number of projects undertaken in trade, energy, oil-gas, nuclear power, and mining. They acknowledged the encouraging results of the first round of negotiations on a free trade agreement (FTA) between Vietnam and the Customs Union of Russia, Kazakhstan and Belarus, which took place in Hanoi in March. The final signing of the agreement will be a breakthrough in raising two-way trade to US$7 billion in 2015 and $10 billion by 2020, the two PMs agreed. They praised the operational efficiency of Vietnam-Russia oil-gas joint venture companies and pledged to continue providing support for their oil-gas businesses, while encouraging the establishment of new JV companies to explore oil and gas in Vietnam, Russia and other countries. The two countries will also cooperate closely to implement the Ninh Thuan 1 nuclear power plant project as scheduled, using the most modern technology to ensure the safety, quality and efficiency of the plant, they said. They also appreciated cooperation in science-technology and education-training between the two countries, and agreed to take measures to boost this cooperation. They agreed to continue boosting bilateral cooperation in the fields of military technology, military training science-technology, and education and training while speeding up the establishment of the Viet-Russia Technology University in Hanoi. The two sides encouraged stronger cooperation between their countries and pledged necessary incentives for their business communities to operate efficiently in their respective markets. While expressing their appreciation for the significant contributions by Vietnamese nationals in Russia and Russian nationals in Vietnam, they said such cooperation has helped consolidate the friendly and comprehensive cooperation between the two countries. The two leaders promised to create favorable conditions for their expatriates to live, work and study in their respective territories in line with their legal systems. After the talk, Medvedev and Dung witnessed the signing of a 2013-15 cooperation plan between the Vietnamese Ministry of Culture, Sports and Tourism and the Russian Federal Agency for Tourism; a 2013-15 cooperation program between the countries’ Ministries of Justice; and a cooperation agreement in science and technology between Hanoi National University and Moscow State University. They were also present at the signings of a credit contract between the Vietnam Joint Stock Commercial Bank for Industry and Trade and the International Investment Bank, and an agreement on railways development between the Vietnam Railways Corporation, An Vien Group and JSC Russian Railways. The Vietnam National Oil and Gas Group also signed a Memorandum of Understanding on producing and using gas as fuel with Russia’s Gazprom; an agreement on the establishment of a drilling joint venture in Russia with Zarubezhneft; and a protocol on oil refineries and petrochemical and oil and gas exploration with Gazprom Neft.