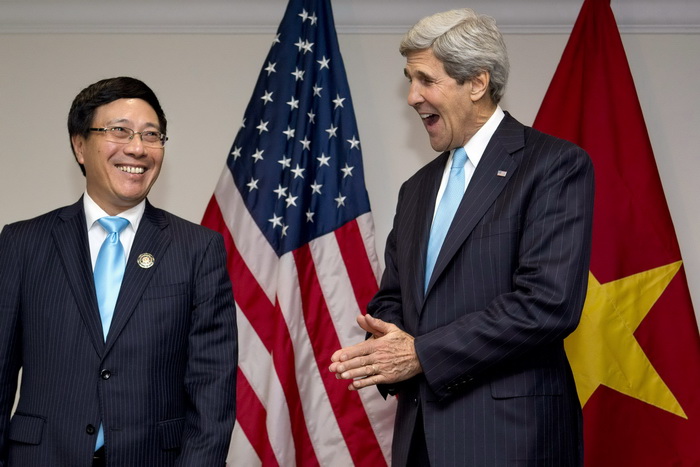 The building of a Code of Conduct (COC) in the East Sea was among the top agenda of the ASEAN Regional Forum (ARF–20) and the third East Asia Summit Foreign Ministers’ Meeting (EAS–3) in Brunei on Tuesday.

>> East Sea issues must be solved by int’l law: FM Minh At the 20th ASEAN Regional Forum, the ministers discussed recent developments in the East Sea and emphasized the importance of maintaining peace, stability, security and maritime safety in the East Sea. Vietnamese Foreign Minister Pham Binh Minh attended both the events, during which the ministers emphasized that all parties should peacefully settle all differences in the East Sea without using force or threatening to use force, in line with international law and the 1982 United Nations Convention on the Law of the Sea (1982 UNCLOS). The ARF applauded the ASEAN Six-Point Principles on the East Sea, encouraged all related sides to strengthen exchanges of opinions and approaches to the issues to increase trust and cooperation in handling risks in the sea. The foreign ministers also praised efforts to boost maritime cooperation in fighting pirates, search and rescue at sea, maritime security, environmental protection, and connectivity at sea. Speaking at the event, FM Minh also highlighted the Six-Point Principles of ASEAN on the East Sea, while underscoring the importance of principles on building trust and settling disputes peacefully without using force, respecting international law and the 1982 UNCLOS and building COC as soon as possible.

The ministry also lauded that ASEAN and China will conduct official political consultations about a COC in September 2013. He suggested that ASEAN countries work together to build a mechanism for regional cooperation in preventing incidents at sea, boosting maritime search and rescue, and giving humanitarian treatment and support to fishermen at sea.  Later the same day Minister Minh met US State Secretary John Kerry and the two sides discussed bilateral issues and regional and international matters of mutual concern. Minister Minh expressed his hope that Kerry will make more contributions to the development of Vietnam-US relations for the sake of both peoples and for peace, stability and development in the region and the world.