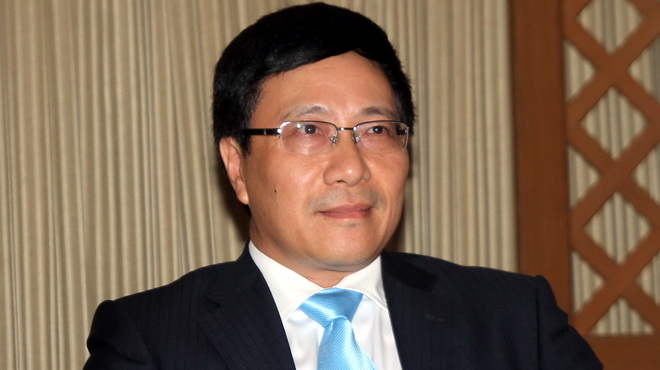 The recent regional meetings have proposed solutions for the implementation of ASEAN’s cooperation priorities, including the building of the ASEAN Community by 2015, Vietnamese Foreign Minister Pham Binh Minh said. The minister made the statement while reviewing the outcomes of the 46 th ASEAN Ministerial Meeting (AMM-46) and related meetings in Brunei’s capital city, Bandar Seri Begawan, from June 29 - July 2. These meetings took place in the context of great opportunities for regional peace, stability and development cooperation despite concurrent security and economic challenges, Minh said. At the meeting, delegates discussed ways to strengthen regional connectivity and enhance relations with ASEAN partners, and exchanged regional and international issues of common concern. Minister Minh emphasized that the AMM-46 Joint Communiqué, agreed upon by ASEAN countries, not only maps out the regional grouping’s prioritized orientations until 2015, but the vision and development process over the next decades. Accordingly, ASEAN will consolidate its ties with partners, boost their participation in regional connectivity, contribute to common goals of regional peace, stability and development, and the building of an ASEAN Community by 2015. All partners backed ASEAN’s central role in dealing with regional issues as well as in the frameworks of ASEAN Plus One, ASEAN Plus Three, East Asia Summit (EAS), ASEAN Regional Forum (ARF), and ASEAN Defense Ministers Meeting Plus (ADMM Plus) among others,  Minh said.

The East Sea issue, the minister said, involved many concerned parties at the meetings, where they all attached importance to ensuring and maintaining peace, security, safety and free navigation in the East Sea .

after reviewing many complicated developments in the sea area, almost all participants suggested relevant parties refrain from using or threatening to use force, settle disputes by peaceful means and implement reached commitments in accordance with international law, especially the 1982 United Nations Convention on the Law of the Sea (UNCLOS 1982) and the Declaration on the Conduct of Parties in the East Sea (DOC). Regional countries and partners emphasized the need to build a Code of Conduct in the East Sea (COC), hailing a Senior Officials Meeting (SOM) COC exchange agreed upon by ASEAN and China, Minh said. Vietnam proposed solutions for strengthening trust-building and establishing an ASEAN-China hotline for issues at sea, emphasizing the humane treatment of fishermen working at sea, he added.