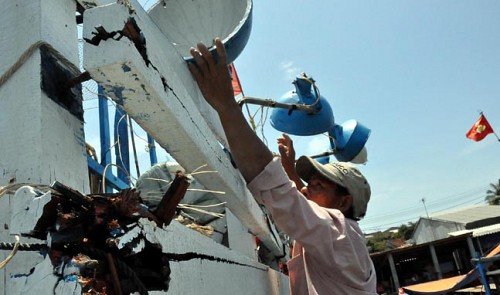 Vietnam’s Ministry of Foreign Affairs on Wednesday voiced protest about the attacks by a Chinese fishery patrol boat on two Vietnamese fishing vessels in the waters off Vietnam’s Hoang Sa (Paracel) archipelago on July 7.

When answering reporters’ questions regarding the incident, the Foreign Ministry spokesman, Luong Thanh Nghi, said that these acts violated Vietnam’s sovereignty over Hoang Sa archipelago and Vietnam’s sovereign rights and jurisdiction in the East Sea.

Such acts runs against the Declaration on the Conduct of Parties in the East Sea (DOC), the spirit of humane treatment of fishermen, and the agreement on basic principles guiding the settlement of marine issues between Vietnam and China, Nghi said.

As reported by relevant agencies, the QNg 96787 TS boat, owned by Vo Minh Vuong, 36, was operating off Da Loi Island, part of Vietnam’s Hoang Sa (Paracel) archipelago, on the morning of July 7 when it was attacked by a Chinese fishery patrol boat with code number 306. The Chinese ship’s crew threatened the boat’s fishermen with guns, beat them with electric batons, broke furniture, took away navigation tools and other assets, and took photos and videotaped the fishing boat. The attackers then towed the ship to Cay Island, part of Hoang Sa. The Chinese ship later attacked QNg 90153 TS ship, whose captain is Mai Van Cuong, 29, and similarly, its crewmembers beat fishermen, destroyed furniture, and took away assets and navigation equipment. The foreign ship then tied Vuong’s ship to Cuong’s and asked the former to tow the latter to Ly Son Island. According to the ministry’s spokesperson, a representative of the ministry has met representatives from the Chinese Embassy in Hanoi to hand over a note protesting the act. The Vietnamese side requested that Chinese authorities launch an investigation into the incident, strictly deal with the above-mentioned wrongdoings, pay compensation to the affected fishermen, and take measures to prevent similar incidents from occurring in the future.