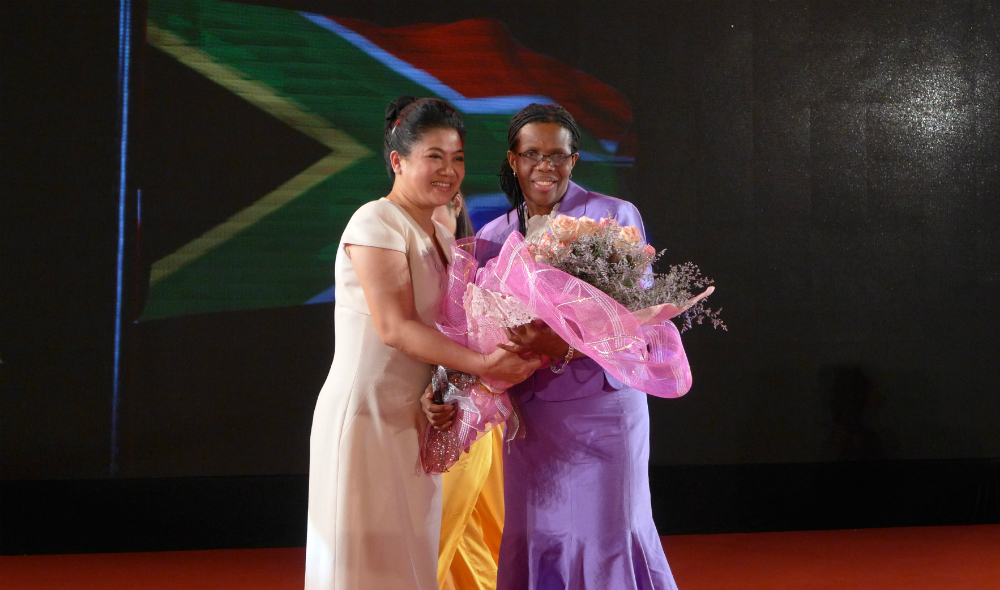 The South African Embassy in Vietnam and its Honorary Consulate office in Ho Chi Minh City held a reception on Wednesday evening to celebrate the 20th Freedom Day of South Africa (27 April).

The ceremony at White Palace Convention Center, located in the city’s Phu Nhuan District, was attended by Nguyen Thanh Chin, Standing Member of the HCMC People's Council, Do Thi Kim Lien, Honorary Consul of the Republic of South Africa in the city, representatives of other Consulate General corps, and officials from the municipal Department of External Relations.

Addressing the ceremony, Kgomotso Ruth Magau, the Ambassador of the Republic of South Africa to Vietnam, extended her country’s gratitude to the international community, including the Southeast Asian country, which all “played a pivotal role in assisting [South Africa] to realize the freedom.”

“On 27 April 2014, South Africans will come together to celebrate what we celebrate here today, our country’s first democratic elections of 1994. That historic day gives resonance to the perennial ideals for which our forebears selflessly laid down their lives in the past century,” Magau said.

“Our freedom is about building friendship, bridging boundaries and strengthening our relations with those who stood by us during our darkest moments in the history of our country,” she said.

“Vietnam is no exception. We have come a long way from our divided and bitter past to a society based on equality, dignity and respect for human rights. Our Constitutional order has proved itself to be strong,” she added. Magau also stressed that Vietnam is one of South Africa’s important trading partners in Southeast Asia.

She also expressed her pleasure at the development of the relation, friendship and multifaceted cooperation between Vietnam and South Africa, as well as the comprehensive ties between the two sister cities of Ho Chi Minh City and Johannesburg.

The ambassador hoped the two countries will consolidate and develop their political and economic relationships this year when they are celebrating 20 years of diplomatic relations.

Magau also lauded Do Thi Kim Lien, the Honorary Consul, for her contribution and dedication to the promotion of South Africa’s image in Vietnam for the past five years.

Lien is the main sponsor of a scholarship program and photo exhibition titled “Beyond the Darkness," which showcases 108 black-and-white photos, by photographer Tran The Phong, that sketch the daily lives of Vietnamese children with disabilities.

All of the proceeds from this event, which is slated to last from April 15 to May 2 at Nguyen Dinh Chieu School for the blind in District 10, will be used to establish a scholarship fund for the school’s students.