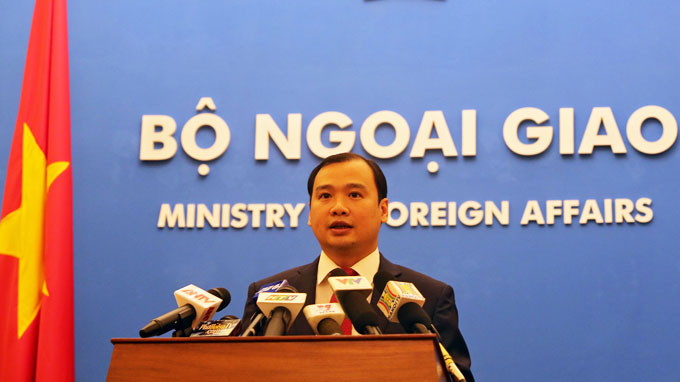 During the conference held in Hanoi at 3:00 pm on Thursday, the Vietnamese Foreign Ministry answered questions from representatives of nearly 100 news agencies and newspapers in and outside Vietnam.

The event was organized amid tensions caused by China's illegal placement of an oil rig in Vietnamese waters in the East Vietnam Sea since May 1 and following worker riots triggered by violent people as they have secretly joined peaceful protests against the Chinese placement in some localities over the past few days.

China has dispatched many ships and aircraft to guard the platform and rammed or fired water cannons at Vietnamese vessels tasked with requiring them to leave Vietnam's waters since that date.

In the mainland, many Vietnamese have peacefully marched to object to the deployment of the oil rig but some violent people have incited others to riot and sabotage corporate factories and assets in the last several days.

The Vietnamese government has vowed to strictly punish these thuggish inciters and safeguard foreign investors.

Vietnam strongly opposes China’s deployment of oil rig Haiyang Shiyou 981 in the Vietnammese exclusive economic zone which breaches the 1982 UN Convention on the Law of the Sea, and the Declaration on the Conduct of Parties in the East Vietnam Sea (DOC), Foreign Ministry spokesman Le Hai Binh said at the conference. “Vietnam resolutely demands that China remove the oil rig and its escort vessels and aircraft from the Southeast Asian country’s exclusive economic zone and not repeat similar actions in the future,” Binh added.

“On this occasion, Vietnam would like to give thanks to countries, individuals, and organizations that have voiced their opposition to China’s acts as well as our gratitude to local and international media for their unbiased news reporting to expose China’s wrongful behavior,” he said.

* Has Vietnam reported the illegal Chinese oil rig placed within its exclusive economic zone to the United Nations? Will Vietnam bring this case to the UN Security Council if China keeps refusing to withdraw the drilling platform from Vietnamese waters? Does Vietnam support other countries to bring this issue to the UN Security Council?Le Hai Binh: China’s acts have affected peace and stability while countries in and outside the (Asia Pacific) region are trying to put forward peaceful resolutions such as speeding up the introduction of the Code of Conduct in the East Vietnam Sea (COC). In the meantime, Vietnam would like to affirm that we will use appropriate measures in line with international law. On May 7, Vietnam issued a diplomatic note that opposed China’s violation of Vietnam’s exclusive economic zone to the UN. We will take necessary action, depending on the situation. We have considered the solutions mentioned in the question and will adopt them in due course.

* What tactics has Vietnam employed around the Chinese-run oil rig? Is it true that Vietnam has deploy ships merely to annoy China until it removes its platform? What about human casualties from both sides? Based on the current situation, how long will it take for Vietnam to adopt another solution to dealing with the issue, such as military measures?Le Hai Binh: No matter what the tactics are, Vietnam has commitments and determination to protect national sovereignty and to request China to remove its oil rig, vessels, as well as aircraft from Vietnamese waters. However, Vietnam will act with restraint and oppose any violent acts.

* Does Vietnam have any plan to file a lawsuit against China? Would Vietnam take military measures in the event that China does not remove its rig? As of this morning [May 15], I have learned that up to 21 people were killed during riots in the central province of Ha Tinh last night. Can you confirm it?Le Hai Binh: Taking legal measures for peace is stipulated in the 1982 UN Convention on the Law of the Sea. So, Vietnam will use such measures if necessary. There is no evidence to confirm the death toll in Ha Tinh.

* What is Vietnam’s point of view when Prime Minister Nguyen Tan Dung is going to visit the Philippines while Vice State President Nguyen Thi Doan will visit Shanghai, China?Le Hai Binh: Up to now, Vietnam has remained faithful to diplomatic channels to deal with all issues. What the premier said at the 24th ASEAN Summit [that wrapped up on Sunday] in Myanmar helped the world have a better understanding of the current situation.

* What should Vietnam do to prevent aggressive acts from extreme patriots in some Vietnamese localities?  Le Hai Binh: It is quite natural and legitimate that Vietnamese have expressed their patriotism and determination to protect their country’s sea and island sovereignty. But all people have to comply with laws.

* According to my information, two people were killed during riots in the southern province of Binh Duong. Can you confirm that?Le Hai Binh: We do not have that information but we will ask local authorities to verify it.

* It has been reported that a Chinese was killed during riots in Ha Tinh. Can you confirm it?Le Hai Binh: According to authorities in Ha Tinh, a man was killed after two groups of workers were involved in a conflict. The authorities are verifying this case and taking the injured people to hospital for treatment.

* We have heard that hundreds of Chinese in Vietnam fled to Cambodia for their safety. Is it true?Le Hai Binh: We do not have that information. The situation is now stable. We will try our best to protect the rights and assets of enterprises in Vietnam. The government and the majority of Vietnamese people condemn the malefactors who have sabotaged Chinese-owned companies and others. Vietnam is always committed to continuing dialogue with China over the oil rig Haiyang Shiyou 981.

* What is the Foreign Ministry's viewpoint on the violent behaviors of rioters in Binh Duong recently? Why did Vietnamese destroy the property of Taiwanese-owned companies while they were protesting against China? Does Vietnam have any plan to compensate for such losses?  Le Hai Binh: We would like to confirm that some people have taken advantage of peaceful marches to incite protesters to riot, cause public disorder, and instability in Binh Duong. Right after the incidents, authorities in Vietnam quickly cracked down on these lawbreakers. We would like to affirm that Vietnam will take all necessary measures to ensure the legitimate rights and interests of enterprises, including those owned by Taiwanese, in our country.

* It has been reported that Vietnamese Deputy Foreign Minister Ho Xuan Son is visiting Beijing. What are his main tasks? The Chinese Ambassador to Vietnam finished his term more than one month ago. Has China appointed a new ambassador?

Le Hai Binh: Deputy Foreign Minister Ho Xuan Son visited China from May 13 to 15 when he was scheduled to have straightforward talks with Chinese authorities about all fields. The new Chinese ambassador arrived in Hanoi on May 11. He will present credentials to the Vietnamese government soon to take up the new post.